READ the whole story behind the photos. 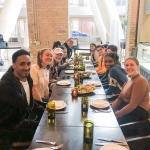 When Teachers Go the Extra Mile

The Pimicikamak Cree First Nation in Cross Lake, Manitoba declared a state of emergency in March 2016 because of the suicide of six young people within three months, and the 150 students they had on suicide watch. This story is about some Toronto teachers who responded with action, and what came of it. 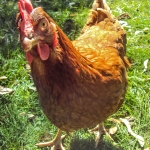 I Know Why the Chicken Crossed the Road…

Along with a long list of accomplishments as a Toronto City Councillor, Joe Mihevc also introduced the backyard chicken bylaw where residents could keep up to four chickens in their yard. Here’s how it’s working at his home, especially breakfast-wise. 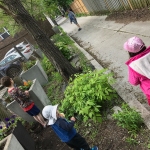 We first encountered and wrote about this tiny strip of public space three years ago and we’ve been following its transformation ever since. It is a casual and informal spot conceived and initiated by Suzanne Long, a tenant whose apartment overlooks the laneway. It is now well on its way to becoming a true community garden.

The Midtown in Focus plan, unanimously passed by Toronto City Council in 2018, has been languishing, ignored, on Minister Steve Clark’s desk for six months. The Yonge and Eglinton neighbourhood is bursting at the seams and if the plan is not approved by June 6 the community will be beyond a breaking point.

How the Mighty have Fallen: the demise of our tree

It seemed in the end as if the tree itself declined our efforts to save it. During the windstorm on June 13, 2018 the one remaining large top limb of the old Norway maple in front of our house fell.

Windstorm-damaged tree gets a reprieve! We are still happily shaded with a view of tree branches from our bed. 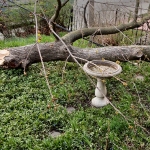 Sometimes, watching the wind whip the limbs around our century-old Norway maple, the thought did occur to me that someday this tree is going to kill me as I lay in bed. That didn’t happen, but the latest windstorm did take down most of the tree. 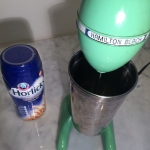 In search of the iconic malt drink that shaped my childhood taste buds in Wisconsin, I was surprised where my quest led me in Toronto’s multicultural abundance. 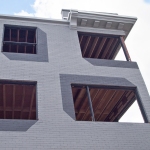 Build It and They will Come

The renovated building on St. Clair West is bringing new life to a tired corner. A co-working space, a café and the offices of an award-winning architecture firm will create a fresh community hub.

Staying Alive: Toronto’s Columbus Centre members fight to save it from its own board of directors

Toronto’s Columbus Centre, considered to be the heart and soul of the Italian community in the city, is besieged by its own board. Forced by the city to hold a public meeting in May, Villa Charities Inc., finally revealed its highly unpopular plans for the much-loved centre.

EDIT is a design and technology exposition with big aspirations to change the world. Installed recently for a week in a huge derelict soap factory the intention was to inspire, connect, demonstrate, and share solutions to global problems.

Yolande Auger danced with the National Ballet of Canada when it rose to international acclaim in the 70s and 80s. Although she retired from the profession years ago, she’s still dancing.

Our ravines and parks provide wonderful recreation places for city-dwellers while at the same time cleaning our atmosphere and combatting global warming. A historical, geographical and a literary appreciation. 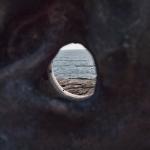 Belmore is an award-winning Canadian artist and member of the Lac Seul First Nation who has a new installation at Pukaskwa National Park in northern Ontario. Here, she invites visitors to ‘listen to the land’.

Picnic Revolution comes to the beach

What to do when you’re enjoying a perfect beach day but hunger pangs threaten to end the idyll? There’s an app for that!

Galvanized by the image of a lifeless toddler washed ashore on a Turkish beach, a group organized themselves and sponsored a refugee family of seven. Their story is all about successful community building. 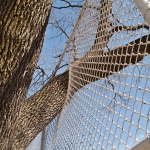 A historic Toronto high school is being revitalized with the help of a local community group. Here is the plan for a new recreational and green space for students and neighbours. You’re invited to help and celebrate!

Once again in Toronto someone is out to prove that you don’t have to be athletic to enjoy going outside in winter. That’s right, no skiing, skating or sledding involved.

After Marcie Ponte immigrated to Canada with her family in the early 60s her young life was marred by tragedy and unforeseen challenges. Undaunted, she went on to create a good life for herself while making a remarkable contribution to the lives of immigrant women.

Since Ontario school boards are no longer allowed to raise tax dollars, the Toronto Board has begun selling off older schools, often historic buildings, for cash to make repairs on other aging schools. Many of the sold properties are demolished, usually not in the best interests of their communities. 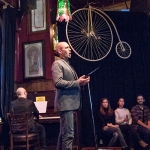 Music on Every Scale

Toronto offers a rich array of live classical music on every scale of performance. In addition to large concert halls, there are small venues where you can hear solo and ensemble performances by musicians at every level of professional accomplishment playing stimulating new, unconventional, or seldom heard compositions.

When Eric Plato was growing up in Niagara Falls, Ontario in the 1970s he had no idea that he was the great-grandson of a man who had escaped slavery through the Underground Railroad in the 19th century and settled in Canada.

In the morning just as the sun rises he gets up for his daily pilgrimage, the loose cloth from his turban and white dash-dashi trailing in the desert wind. He walks alone…

When a family emigrates to Canada no matter what they bring with them, so much is left behind. The recipe for this family’s traditional cookies carry the stories of their lives. 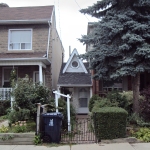 Casa Loma and the Nano Castle

A video dock-tale about the tiniest house in the province, built at the same time as Casa Loma, and about how we got Ontario Hydro, the world’s first publicly-owned utility.

With no big blocks of real estate left for parks in our dense urban landscape, the city has been creating public areas in the spaces between and around new condos and commercial developments. These are POPS (Privately Owned Publicly-Accessible Spaces). How do they work and how can we use them?

Transit Geek in the City

Councillor Joe Mihevc’s dedication to the Toronto Transit Commission (TTC) is unwavering. Like a proud father, the self-described transit geek dotes over this growing colossal public service, which in 2021 will celebrate its 100th anniversary. His own father was a TTC mechanic. 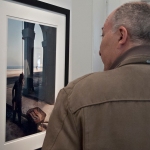 Acclaimed photographer Vincenzo Pietropaolo has produced a phenomenal body of work documenting people, cultures and ways of life in different parts of the world. His photo essays include compelling images from New York City, the Caribbean, Mexico, Havana, a number of places in Italy, and of course Toronto.

HYDRO: Getting the Power we Deserve

As privatization continues to be a public issue, we examine Hydro. Huddling under the covers in the dark and cold that December, the ice storm and its aftermath got us asking. Why was it such a massive outage? What was taking so long to fix it? Why is our system vulnerable to this? Who is responsible? How can we make sure this never happens again? 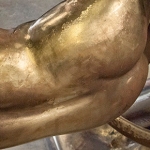 Progress: The Beginning of the Bronze Age

A continuation of our story following the commissioning and creation of the public sculpture TO THE RIVER, which will be installed near the Humber River in Toronto.

Trinity-Bellwoods Park is a hub of urban activity in downtown Toronto. It was not always so. It used to be a 50-acre field with a small river famous for its salmon fishing. Our resident historian Robert Fisher traces the history of the park from its bucolic days to its bohemian times to its current artists’ oasis.

Bria Weaver is nothing if not passionate about her Roncesvalles food tour venture: Food Nook Tours. We caught up with her a few weeks ago for a private food tasting tour of five purveyors in her west end Toronto neighbourhood.

What do you do when five of your eight dinner guests have a total of six different food restrictions, some with multiple limitations? Here’s how to handle it with finesse. 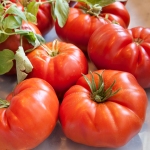 Well-travelled tomatoes and the people who love them

What will we do for a delicious tomato and once we find it how far will we go to make sure we get one every year? Gardeners and eaters alike will appreciate this journey. 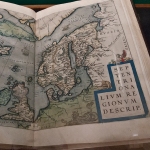 Putting it on the Map: The Art of Cartography

Maps have always told us more than where we are or how to get where we’re going. A cartograph
y exhibition at the Toronto Reference Library demonstrates the ravenous, fill-in-all-the-blanks nature of the European age of exploration. 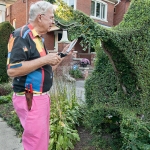 A Property of Art

Topiaries are usually not expressions of abstract art or movement. They are often the result of conventional design and constrained execution. Not this one. The partnership of a ‘tree artist’ and an encouraging homeowner has resulted in an extraordinary creation.