Last time I stood at the intersection of Yonge St. and Gould, where Sam the Record Man’s neon discs used to swirl hypnotically, the site was a deep hole at the bottom of a crane. That was in 2013, and as we all are frustratingly aware, you still can’t go anywhere in this city without having to maneuver around new buildings in process. Construction cranes sprout here in Toronto in greater numbers by far than anywhere else in North America. And with all these new additions, the consensus is that there is design deficiency. Our streetscape and skyline are crammed with boring grey boxes and glass curtains of banality.

An exciting exception has risen up and now holds this corner – the Ryerson University Student Learning Centre.

Eight stories, with a slight bulge rather than straight lines, its glass façade is printed in irregular patterns that obscure the rectangularity of the panes. The structure itself clearly denotes the entrance with a  large blue metal canopy that’s folded partly up one exterior wall. Its triangular vertical section suggests a conventional roof shape, covering the wide stairway and ramp underneath it while extending into the atrium. This creates a sort of front porch, a spot to meet up or to sit on the steps and watch the downtown sidewalk scene – engaged with the street, connecting with the city. It feels welcoming, inviting.

Inside is where it gets truly innovative. The Student Learning Centre was designed by Snøhetta and Zeidler Partnership Architects, who describe their inspiration as “the historical gathering spaces of the Stoas and Agoras in ancient Greece where learning was inherently social.” I recently walked through the building with Dr. Melanie Panitch, the John C. Eaton Chair in Social Innovation and Entrepreneurship in the Faculty of Community Services at Ryerson University. She observed of the new student centre:

I have to say that when this building was opened it was like it had been submerged in water and when it came up there were students everywhere. It’s always crowded, not too crowded but always well-used. I don’t know where they all were before this building was here!

The atrium sets the tone for the entire interior – spacious with irregular heights and angles, folded metal ceilings and glimpses through coloured glass walls into rooms on higher floors. An info screen just inside the door offers a user-friendly digital way to orient yourself.
Click on any photo to enlarge 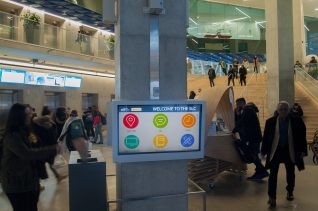 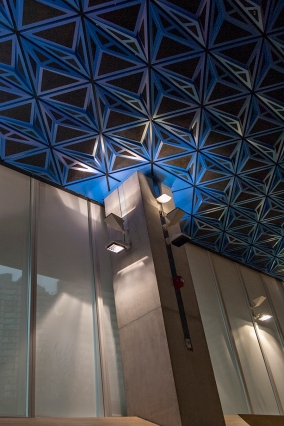 Each floor is named and colour-coded according to its function and theme with an explanatory key at the elevator bank.
Click on either photo to enlarge 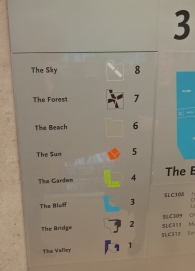 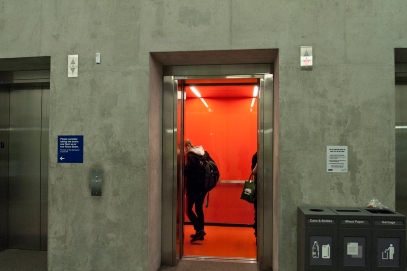 Each is associated with a natural environment designed to create a distinct ambiance and foster a corresponding mode of use, from extremely social to absolutely silent study spaces. Top to bottom they are: The Sky, The Forest, The Beach, The Sun, The Garden, The Bluff, The Bridge, The Valley.
Click on any photo to enlarge 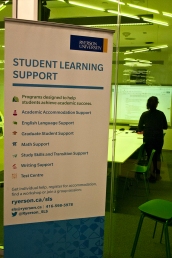 My favourite spot in the building, as in life, is the beach. The entire floor is open, expansive and bright with scattered, moveable furniture for spontaneous, flexible groupings. Warm, sand-coloured wood floors edged with aqua slope down toward a sea-blue carpet, where students lie on loungers as if floating, but without water worries for their open laptops.
Click on either photo to enlarge 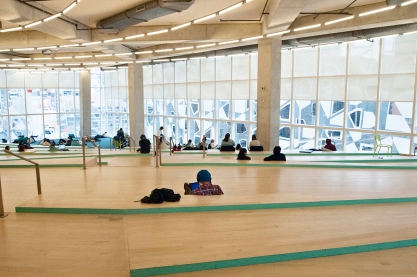 It’s obvious from the occupied desks, chairs, lounges, floors and the lively interactions that this building is working for students. Its enormous, lofty spaces do not feel cavernous. The angular shapes, high ceilings, intriguing corners and alcoves accommodate the variety of uses necessary for a long day on campus. It is active, buzzing. The noise level is stimulating but not cacophonous and nooks abound for quiet conversations or even naps. The design facilitates a variety of study modes – collaborative engagement, quiet contemplative thought, collective and individual workspaces. The Digital Media Zone is a room full of every kind of tech equipment, staffed with facilitators to help everyone use it. Small study rooms for groups of four to eight students can be booked online. Plugs are everywhere since no one can study without electronic devices, and you can’t be constantly connected without occasionally connecting. It’s beautifully integrated with the library in the building next door via a bridge. It is entirely a student space. 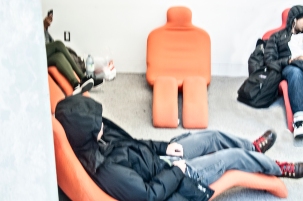 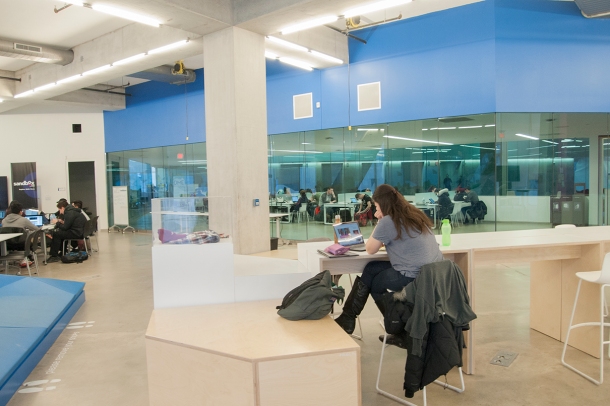 And how does it work as instructional space? Dr. Panitch describes her experience teaching a new course in the LaunchZone.

“The LaunchZone is supposed to be a meeting place for people who are interested in social enterprise, social enterpreneurs, new ideas…it’s a creative space that is meant to foster their coming together. The coordinator of the space wrote to me and said that they were getting a lot of students in there from the business school and from engineering, cooking up entrepreneurial schemes, but they were not getting much traction from students in the faculty of Community Services. So they looked around for the coolest course on campus and came across mine, Foundations in Social Innovation. I’ll remember that forever,” she laughs as she recalls anticipating that within five minutes of their meeting he would perceive her un-coolness. “He said they thought one way of attracting students from that faculty would be to offer me this space for my class.”

That was in September, about two hours before her first class was to start in a dingy room in a different building with no lighting and no presentation technology. In that introductory class she told her 25 students that they’d been offered a space in the new building and suggested they go have a look and choose which classroom they preferred. “We all walked over and they were speechless. You know, they’re all students working with under-privileged kids, abused kids, disabled kids, and in professions that are poorly paid and low-regarded. Somehow walking into this space was amazing. It was clear that yeah, we’re going to take this!”

For the first couple classes a few of them lay on the big blue mountain, but in the end came back to where they could sit at a table and have their screens in front of them. The space is big and you could feel too distant. “It was pretty cute how they got themselves perched up there. The lack of intimacy was a bit of a downside that we had to talk about, but we continued to meet there.” 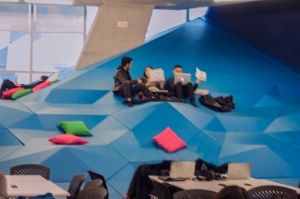 They were there but they also explored. This was the first time that Foundations in Social Innovation was being offered and Dr. Panitch was conscious of organizing it well, which included moving out into the city. “In social innovation literature wicked problems is a term used to describe those huge, can’t-get-our-head-around-them problems such as poverty, climate change, accessibility, youth unemployment. These are big and complex issues – if we knew how to solve them we would have done it already. One of the things that is talked about in looking for solutions or approaches is that you need to work with people you don’t usually have a conversation with – non-traditional partners such as corporations, businesses, communities, the police.”

She had made contact with the Downtown BIA on another project and found that they were aware of issues on Yonge St., so in week two she invited them in to talk. Because they work with 51 Division, they brought with them the community policing officer. This made her apprehensive because her students are child and youth workers, and in work situations with their clients, encounters with the police are often fraught. “But they took us on a walk up and down the laneways all within ten minutes of Ryerson, looking at inadequate lighting, what you see on the ground, drugs, where you feel safe, bags of garbage with needles sticking out of them because there are no safe injection sites and the kits that they get don’t have needle covers on them, where people pee, where a guy sleeps on the sidewalk because the doorway where he used to sleep got blocked up to avoid liability. And I’d never seen any of this even while working here for years and walking every day from the College Park subway!”

In the following weeks she took her students up to the garden on the rooftop for a discussion with the people who work there about food security and affordability. She brought in disability advocate David Lepovsky to talk about accessibility and had them Tweeting Queen’s Park. She arranged an artist talk at Tangled Art Gallery by Gloria Swain, whose exhibition there was on the theme of mental health. Many of them participated in Social Justice Week and went on the student demonstration around fees, and they had never been on a demonstration before. “And the course kind of got organized that way. It isn’t how I had designed the syllabus originally, but the idea of understanding the different ‘wicked problems’ intrigued me and caught the students’ imaginations.”

There was staff and infrastructure at the LaunchZone, so she didn’t have to stress about the technology. “For example, when someone suggested a relevant episode of an old TV show, I just asked and they had it up on the screen right away – it didn’t have to be planned. It was really kind of fabulous.” And other students began to notice or hear about the class. “So the students got to talk about where it was and what they were doing. It was amazing.”

“Of course nobody is going to solve these ‘wicked problems’ in a twelve week course, but the students could really become conscious of how complicated these are, get riled up and say something should be done and see themselves, in a way. They could think critically about the work that they do.”

In the end-of-term wrap up the students said that they’d never seen a space like this before. “They felt so valued. You know, the students live all the way from Mississauga to Oshawa; they have to really want to come to class. And a couple of them said you know, I don’t always go to every class, but this one….  So whether it was the space or the course or it was me, I don’t know. But I think that the LaunchZone space added to how I ran the course. It allowed me to be a bit more adventurous.”

WOW! A spectacularly creative space, a constellation of light and colour and sound and language and form – and narrated so vividly that I feel I have actually had the tour. Can’t wait to visit.
Catherine Frazee, Nova Scotia

Great article. Thanks for “showing” us the city!
Mariella Bertelli, Toronto

What a beautiful building. A lot of thought must have gone into making it attractive and useful for students. The Big Blue Mountain is a very clever design. This building recreates the original idea of a university (as the word itself demonstrates) as a place where many disciplines can mix and enrich each other.
The class tour of the neighbourhood was most enlightening and shocking. This is the reality social workers, police and mental health workers face daily. They are indeed unsung heroes.
This was an excellent article and the photos, as usual, first rate.
Robert L. Fisher, Toronto

Planning to visit asap. Thanks for the wonderful photos and of course the article.
Pat Saul, Toronto