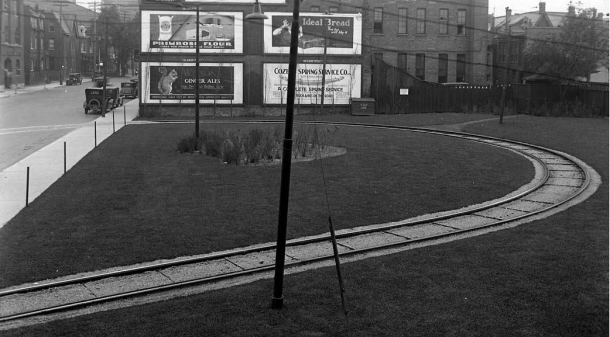 In Michelangelo Antonioni’s existential masterpiece, L’Eclisse (Eclipse) (1962), two half-hearted lovers agree to meet at 8 p.m. in a suburb of Rome at the end of a bus line. The camera shows bus after bus arriving, discharging their passengers who hurry off to the surrounding apartment buildings. We hear the squeal of the tires as the bus rounds a curve on its way back to the city. With each arrival it becomes darker, and the street lights come on. The buses are less frequent and the passengers fewer. The two lovers never arrive and the camera dwells on the empty suburban street. The mood is forlorn. We feel sad that this handsome couple (Monica Vitti and Alain Delon) cannot feel any deep love for each other.

It may be that from that time I took an interest in the places that are at once the end of the line and the beginning of the line, most often in the form of a tight curve or “balloon loop”, which allows the streetcar to reverse direction. We often see these on the destination signs, but most of us do not travel the route to the end, so we don’t see the entrance that becomes an exit, usually in some quiet suburb.

Loops have their own kind of architecture, perhaps a little building with a waiting room and facilities for the drivers (motormen). The busier loops have extra sets of track where streetcars can wait their turn to rejoin the main route, or tracks to allow a street car to “loop the loop”, that is, permit the street car to leave the loop and re-enter it to change the order of the cars. For example, a car in the front could loop the loop to become second in line to leave.

Loops also have interesting structures in the pavement. The wheels on your automobile turn at different rates when you make a turn: the inside wheel turns relatively little, while the outside wheel must speed up because it has a greater distance to cover in the same time. The axle is in two parts that meet in a gear system called a differential. On trains and streetcars, axles are attached to the wheels rigidly, so the outside wheels spin faster on turns, causing the inside wheel to slip and strain, producing that distinctive squeal or screeching you hear, for example, on the Yonge line between Wellesley and Bloor Stations. Railroads and the TTC try their best to minimize this noise and extra wear by installing in the pavement or along the track (in the case of subways) a pump that sprays an environmentally friendly lubricant on the wheels and track. In 2007 at the Neville Loop Teflon-coated track was installed to help reduce noise.

On the newer streetcars this pump is installed near the wheels and is controlled by a GPS. You may have read reports of residents complaining about this screeching on the new Cherry Street line (514) at its new loop in the Distillery District, south of King Street on Cherry Street. Land is limited and expensive in cities, so loops have short radii; if the loops could have gentler curves the noise problem would be greatly ameliorated.

At nearly 25 kilometres (15½ miles), the Queen 501 streetcar route is the longest in North America, possibly the world, although the Library streetcar in Pittsburgh, Pennsylvania is about 14 miles long. The Queen 501 takes you across the city from the border of Scarborough (Neville Loop) to the border of Mississauga (Long Branch Loop), across many neighborhoods, the downtown core, right past City Hall, through Trinity-Bellwoods, out to Roncesvalles, the Queensway, through the former towns of Mimico, New Toronto and Long Branch, all long since incorporated into Etobicoke, to Brown’s Line, on the other side of which is the large municipality of Mississauga.

The Neville Loop is very modest, reminding me of, say, the humble beginning of a mighty river like the headwaters of the Mississippi in northern Minnesota. The neighbourhood is quiet, residential, with little shops along almost the end of Queen Street. Nearby is Victoria Park Avenue and the R.C Harris Water Treatment Plant (1932), a marvel of Art Deco style applied to an industrial building. It’s almost as if this area were a small town, with its trees surrounding the loop, from which the Queen streetcar stately emerges on its journey from this relatively sparsely populated neighborhood to the high density of downtown, and then into the neighbourhoods in the west with their gradually thinning populations.

Mention should also be made of the Bingham Loop, at the end of the 502 Kingston Road and 503 Downtowner streetcar routes. It has no sylvan quality, but it definitely has the atmosphere of a quiet nook in the suburbs.

The other “sylvan” loop is in High Park, the terminus for the 506 Carlton route. Coming down Howard Park Ave, you cross High Park Drive, then disappear into woods of the Park.

After traversing the loop, you head down a slight slope, out of the park, back into the city. Here I think of the trams in Europe that took families of picnickers on weekend forays into nature outside Prague or Vienna, or Munro Park (near today’s Neville Loop): Munro Park (properly: Monro Park) closed in 1906.
Click on any photo to enlarge 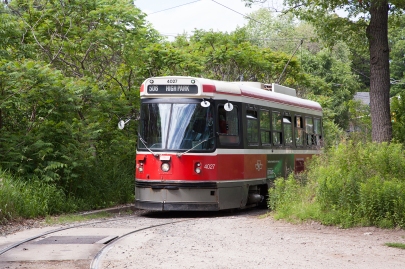 The little lighthouse in this case is the Queen’s Wharf Lighthouse, pictured here in an archival photo from about 1872. This is now the center of the Fleet Street Loop, a loop whose sole purpose is to allow the 509 Harbourfront or 511 Bathurst streetcars to make short turns, that is, turn back before reaching the end of the line. It is located just east of the Princes’ Gates at the Exhibition Place Grounds, about a block from the shoreline of Lake Ontario. It was originally built in 1861 to help guide ships through what was then a shallow, rocky channel. When its light was aligned with another now-demolished lighthouse the captain knew his ship was in safe waters.

Loop within a building 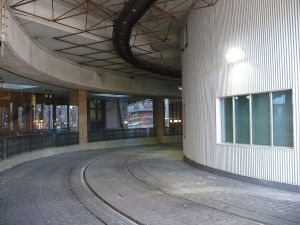 The loop for the 502 Downtowner (Kingston Road to McCaul Street), the McCaul Loop, is located inside a building, or more precisely, the building, The Village by the Grange, a mix of shops and residences, was built over and around the existing loop. As a result, streetcars coming north on McCaul Street, just above Queen Street West and below the Ontario College of Art and Design, turn in a narrow space between the shopping area and a supporting wall.

Seeing a streetcar coming out from a commercial building is a strange sight, although we are used to seeing streetcars at subway stations, say, the 511 Bathurst or 506 College at Main Station in the East End.

Two busy loops make connections to other transit vehicles and have platforms and waiting areas. The first of these is the Long Branch Loop at Brown’s Line and Lakeshore Blvd West, where Toronto ends and Mississauga begins. Not only do Mississauga Transit busses use this terminal, but just a one-minute walk to the west is the Long Branch Go Station.

Along the long wall where the streetcars wait their turn to enter the main route there is a mural, the only one at a loop that I know of.The mural by the artist Stephen Stanley was dedicated by the mayor of Etobicoke in 1996, and depicts, according to the plaque, the history of transportation is this area: canoes, horses, steamboats, streetcars and trains.
Click on either photo to enlarge

The other terminal is the complex Humber Loop, which consists of two balloon loops nearly side by side, one for the 501 Queen streetcar, and the other for the Long Branch streetcar (also bearing the 501 designation) that runs along Lakeshore Blvd West. The two lines were once independent, each with its own turning loop, but there was always the option for streetcars to travel across the loops to either Queen St. or Lakeshore Blvd., or to enter the Roncesvalles Carhouse a short distance away.

Starting in January 2017, and likely through most of the year, the Humber Loop will be closed for upgrades, and during construction on the Queensway and bridges on the route.

Although the 512 St Clair destination sign says “Keele”, the actual western terminus of this route is called Gunns Loop, at Gunns Rd., about a block or so west of Keele Street.

The area between the Gunns Loop and Keele St. was exactly the location, for almost a century, of the Toronto stockyards, with its accompanying noxious smells. The plants were demolished in 1994-1995, with the soil having to be excavated and carried off because it was so thoroughly tainted with decades of slaughter. Today only those with an interest in urban history would know it was ever there.

Loops and the CNE

The last two loops involve the Canadian Nation Exhibition: the Dufferin Gate Loop and the Exhibition Loop, both very busy when the CNE is open.
Click on any image to enlarge 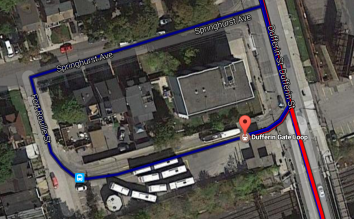 The 514 Cherry streetcars turns south from King St. onto Dufferin St. and enter 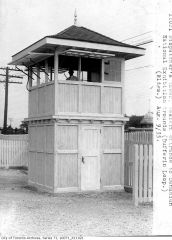 the Dufferin Gate Loop, not far north of the Gardiner Expressway. It is distinctive in that it is the only loop to have a dispatcher’s tower.

This archival photo, from about 1922, shows the original wooden structure, replete with dispatcher.

The 511 Bathurst and 509 Harbourfront streetcars turn back at the Exhibition Gate Loop, which is reached by traveling past the Fleet Loop, then along side Manitoba Road, paralleling the south side of the Gardiner, looping under the Gardiner at Nova Scotia Ave, proceeding east along the north side of Gardiner and back to Manitoba Drive and Fleet Street. The loop under the Gardiner is relatively new, having been built in 1995.
Click on either image to enlarge

T.S. Eliot in Little Gidding (1942), the last of the Four Quartets, was not necessarily speaking of streetcar loops, but it applies nevertheless:

What we call the beginning is often the end
And to make an end is to make a beginning.
The end is where we start from.

What about Earlscourt and Oakwood loops? These 2 still in service. What other TTC loops allow for short turns both ways along the same track like Oakwood Loop?
Stan Salter, Toronto

For 512 St Clair there is Earlscourt loop (once considered a separate line) and Oakwood. For 504 King and 510 Spadina in either direction, is on-street loop clockwise via King St, westbound,Spadina Ave. northbound, Adelaide St. eastbound, and Charlotte St. southbound, as a possible turnback point.

This article can be found in The Big Issues in the section Transit.
We are @livingtoronto2 on social media. Follow us on