When Eric Plato was growing up in Niagara Falls, Ontario in the 1970s he had no idea that he was the great-grandson of a man who had escaped slavery through the Underground Railroad in the 19th century and settled in Canada. During a recent chat at a Toronto café, Eric admits that his parents never really talked to him about the family’s extraordinary past. “They focused on the present – their work, their community, me and my education,” he remembers. Now a successful Certified Management Accountant in Toronto, Eric embodies the hopes and dreams of his parents and what likely were the aspirations of Burr Plato, his great-grandfather. In recent years, Eric has learned more about his family’s history and is proud to share it.

Born into slavery in 1833 in West Virginia, Burr Plato decided in 1856, at the age of 23, to make a break for freedom using the Underground Railroad. Along with seven others he passed through the safe houses and secret routes that made up the network to find his way to Fort Erie, Ontario where he would be a free man. Even though he had been a slave with no possible way of improving his life, he knew that education was the key to success in his newfound freedom. Settling in nearby Niagara Falls he worked as a farmhand and porter while learning how to read and write.

Soon he was proficient in these skills and eager to own his own business. He bought a horse and carriage and became what was called a ‘hackman’ – a taxi driver of the time. He saved money, married, bought a house and had ten children. As an active member of the British Methodist Episcopal Church in Niagara Falls, Burr was keenly aware of the importance of community and citizenship. This church was a centre of spiritual and social activities for former slaves who had arrived in Ontario in the 19th century. But Burr wanted to take his commitment to civic life

beyond the confines of the church and proceeded to run for councilman in 1886, in what was then the Village of Niagara Falls. He was elected to the office, not only by members of the black community, but also by his white neighbours.

In addition to his work ethic and courage, Burr Plato had a wry sense of humour. Although he was duly elected to public office, there were those who claimed he could not possibly be literate and therefore not qualified. A newspaper report of the time about the newly elected village council describes, among a more welcoming attitude, how he handled the disparagement.

“One of the members of the village council failed to appear. It is thought that his qualifications are shaky. Another councilman is a stalwart coloured hackman. His election has excited outsiders, but local people who know him decided that he is among the best men we have. He reads aloud the accounts of his illiteracy, and laughs at them. In order that the county may have a first-class warden for 1887, it is proposed to send him to the county council next year. We hope that good men will be sent from other places, as Mr. Plato wishes to keep good company.”

Burr Plato was one of the first black persons in Canada to be elected to a political office and he kept this position until 1901. He was determined to make his community a better place and owned several properties in the City of Niagara Falls. He died in 1905 at the age of 72. His contributions to civic life were much appreciated and he was widely respected as displayed in the large funeral attended by his many relatives, friends and colleagues.

Although there are still members of the Plato family in the Niagara Falls area, most are now spread out all over North America and Eric has made an effort to learn about as many of them as possible.

One person who is not a relative but who has been a leader in the effort to gather information about the area’s black history is Wilma Morrison. Eric has learned a great deal from her about his family and she and I recently chatted about her work. She says, “I’ve always been interested in Canadian history and this is Canadian history. Everyone knows about Harriet Tubman but not about local heroes in Canada who were important in the Underground Railroad and enabled thousands of slaves to reach freedom.”

Wilma began collecting information when she was working as a school nurse in the 1960s and 70s. She remembers, “I noticed that there was nothing being taught in the schools about the area’s black history so I started to put together a library that documented that experience.” Also a member of the British Methodist Episcopal Church, she used the location to house the material that she gathered. With other liked-minded community members she worked hard to raise the profile of her brethren’s accomplishments. Eventually she had about 4000 documents that became part of the Norval Johnson Heritage Centre Collection, currently housed at the St. Catharines Public Library. Wilma, now 87, is pleased that the material is being well looked after and thrilled that she was able to pass on important information to Eric about his past. When asked about slavery in her own family’s history she replies, “I would imagine there was but unfortunately I have not found the time to follow up the story.”

Although Eric did not get much information directly from his parents about his great-grandfather and his accomplishments, it is clear that as one of Burr’s descendants he inherited that man’s ambition, capacity for hard work and commitment to the community. After graduating from McMaster University with a degree in Commerce, Eric returned to Niagara Falls where he worked in the tourism industry for a while. But the big city was more enticing and he soon left for Toronto. After a stint at NOW Magazine he pursued his CMA designation and landed a job as Controller at the YMCA. There he realized that the non-profit world was where he belonged and he has never looked back. 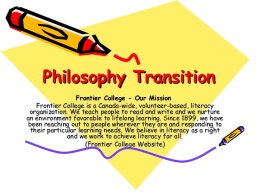 After 11 years at the Y, Eric wanted a change and moved on to the position of Director of Finance at Frontier College, Canada’s oldest literacy organization. The coincidence is not lost on him. As was the case with Burr, one of the roads to his freedom was literacy and now Eric was part of an organization that was helping people strive for that freedom. In addition to his finance job, he became a volunteer tutor helping students with math and preparing to write the exam for the GED. He says, “I absolutely loved it – especially seeing the student’s face when my tutoring worked. It was a great feeling!”

Although Eric is no longer at Frontier College, he has been on many non-profit boards as treasurer and now runs his own training and consulting practice, serving non-profits. His goal is to deliver financial training in a way that makes people more confident about dealing with finances in their organizations. Through his many workshops and training sessions he has reached hundreds of people from various organizations including York University, the University of Toronto, Imagine Canada and other non-profit umbrella groups.

He is grateful that he has learned as much about Burr Plato as is currently available and is always hoping that more historical information will surface about his illustrious ancestor.

Some background information for this piece came from an article in the Niagara Weekly by Walter Cromwell, a member of the Niagara Black History Association.

This article can be found in WHAT’S HERE in the section Portraits.
We are @livingtoronto2 on social media. Follow us on

Wonderful article ! I got to meet some of his descendents.
Sandra Koltusky

Being a member of this family we all need to show respect to Ms Wilma who without her time and effort we would never have had this rich family history passed on to our children. Also, trust me you never heard it in school when we kids in the early 70’s and bet you don’t hear it now either !!
Little Jim

A very inspiring story that is a much needed counterweight to the endless negativity of mainstream news. Racism and hatred of immigrants are rising in Europe and in America; therefore, accounts of success and selfless contributions to society by these groups will, I hope, defuse some of this phobia. Well done!
Robert Fisher, Toronto

My mother was raised by her aunt and her aunt’s husband Jerry Plato in Niagara Falls, NY. Jerry Plato’s father was Burr Plato. I remember Uncle Jerry telling me the story of his father’s escape from slavery into Canada.
Diane Anderson