Councillor Joe Mihevc’s dedication to the Toronto Transit Commission (TTC) is unwavering. He served as Vice-Chair of the TTC from 2003 to 2010, and has stepped up and provided leadership on many public transit projects including the St. Clair West streetcar line. Like a proud father, the self-described transit geek dotes over this growing colossal public service, which in 2021 will celebrate its 100th anniversary. His own father was a TTC mechanic.

Mihevc is a Yorkie (raised in the former City of York), and for people who grew up in the City of York, the TTC was a big part of life. It was slow, buses lumbered along congested roads but if you were lucky enough to live a short walk from a TTC route, you were on your way.

Today, Mihevc watches over the third largest transit system in North America after Mexico City and New York City, two cities with a population of over 8 million. Mihevc talked to LivingToronto about the TTC and the Eglinton LRT, an improvement to transit that is a rare win amidst Toronto’s never-ending transit troubles. 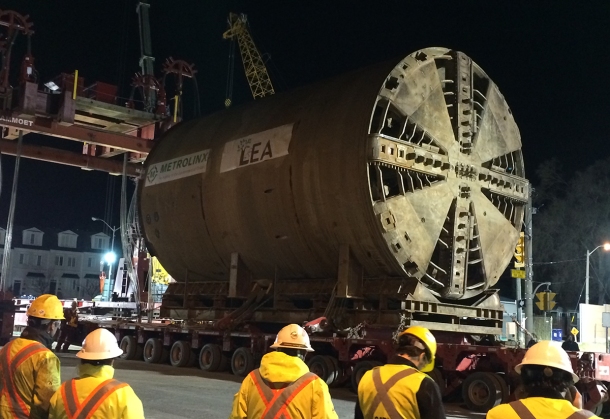 When the tunnel-boring machine for the Eglinton Crosstown LRT had to be lifted and transported over the existing subway at Allen Rd., I sent out an email inviting construction and transit geeks to watch. I think we are redeeming the word geek. A geek is a person who is passionate about something and doesn’t understand why, and knows more than any normal person would about it, and does things like go somewhere at 2 o’clock in the morning to just check it out. Said very lovingly, and of course I’m one of them.

The move was done over two nights in the middle of the night and they had a lot of lights; it felt like that scene from ET when the spaceship lands. I would estimate that each night 300-400 people were there to see this humongous machine that was three stories tall and weighing a million pounds, set on a tractor trailer with 8 wheels per row times about 20 rows, controlled by a joystick. You could see the wheels were straining, this thing was heavy! Cameras were clicking and there were more engineers per square meter than I’ve ever seen in my life. We had engineers from Toronto Hydro, TTC, the City, MetroLinx, Metrolinx consultants, the big contractor for the tunnel boring, the Dutch firm sub-contracted for the lifting machine for the tunnel boring machine and for moving it over. And the conversation was wonderful – it was a geek transit convention.

I pushed really hard for MetroLinx to do this because at the end of the day when life gives you lemons…. We’re wearing the lemons on Eglinton just like we did on St. Clair – businesses are down, traffic is disrupted, everyone’s upset. Those are lemons – we made lemonade out of them. We said there’s some things you have no choice over, in the construction process there’s a lot of things that happen negatively, but we dare to go out there and celebrate. We made it a WOW! I don’t want to get too noble about it, but it really was the human spirit saying Shit’s happening, we don’t care, we’re dancing!

This is the biggest transit expansion ever in Toronto. It’ll run along Eglinton from Weston Rd. to Kennedy station, about half above ground and half underground. Right now, as of the summer of 2016, where it’s at is that the tunnel boring is really done. The big boring machines are both parked in the tunnel at Yonge and Eglinton. They’re just hanging out there facing each other in the ground, and when the station construction begins they’ll be dismantled and taken out piece by piece. Way less dramatic than at Eglinton and the Allen.

So now they’re building the stations along Eglinton and the fascinating piece is that every station will be constructed using a different strategy. For example at Oakwood they’re going to mine the station. At Eglinton and Bathurst they’re going to dig 20 feet into the ground and put a two-meter thick concrete slab and then they’re going to mine under that. At the Allen Expressway they’re going to have the traditional timber structure. All that is going to take another four years, so we are on track for 2021. We’re also putting in a dedicated bike lane, a separated bike lane the entire length so you’re safe from one end to the other end. Right now there’s a bus lane, but when the LRT is done the bus lane is no longer necessary, and that lane becomes a bike lane. It’s in the plan. 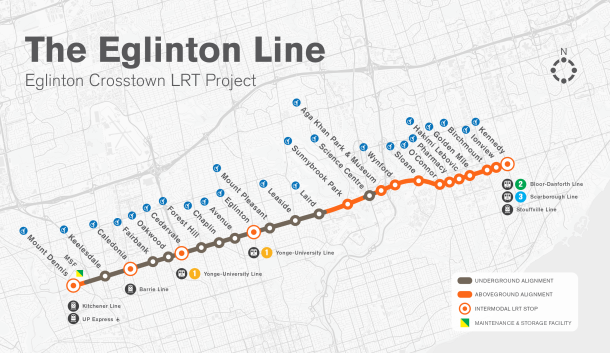 This Eglinton LRT will be a game changer. Now we are doing big investigations about extending the line. Once it opens people will say yeah, let’s continue this. We will have it from Black Creek to Kennedy, about 22 km. Then add maybe another 5-10 km going east, and close to 10 km going west and you’re into the airport. It’s the milk run route to the airport. You’ll be able to jump on the LRT at the Scarborough U of T campus and if you’ve got the time you can eventually go all the way to the airport. Metrolinx is investigating it and I think it’s going to be a green light – not immediately, of course, given how long these processes take. But that’s not going to be a ten year construction because it’s all surface, no tunneling, so that’s a two-three year construction period. That would basically expand the city at the midtown level. Then we have to do something at the southern end because there’s so much density going up downtown. So we’re thinking that through.

Public transit is in my lifeblood. My dad was a TTC mechanic for 35 years, so the dinner conversation was around fixing engines and fixing transmissions and the little inventions that he would build at the shop that would make the process more efficient, and you know little complaints about TTC this, did a great job on that. It’s been part of my family’s culture forever and ever. And it was also our dominant mode of getting around in the city, that and a bicycle. We were a one car family and my dad was working so the TTC was the way we went to all our activities. I think that I may be one of the ones who embody that urbanism around public transit in my genes – it’s gone down to the level of the genes. 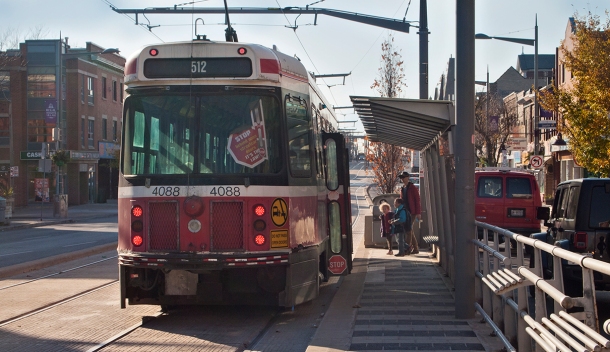 When you look at the city of Toronto and you say why do we have such a vibrant core and neighbourhoods, one of the factors in writing the history of Toronto has to be the TTC and within that the streetcars. Streetcars have added vitality to downtown like nothing else. While other North American cities were hollowing out since WWII, Toronto was growing. I think transit actually makes and breaks communities. We’ve seen it on St. Clair despite the former mayor’s echoes of disaster. We’ve seen development applications and skyrocketing house prices. We now have a problem at the other end, that we want to maintain our diversity which adds to our funkiness and we’re in danger of becoming, I don’t know, maybe too wealthy too fast. That’s the problem we’re contending with, whereas before we were contending with, frankly, a run-down street. You put in new transit, you put in a right-of-way (ROW), you let people have actual mobility on the street and you’ve changed the nature of that community.

It’s very interesting in the last few years on St. Clair a patio culture has emerged. Why didn’t they have that before? I would submit that some of it was ‘perception of safety’. A street with cars whizzing past at 60, 70, cruising down the middle, then you will vote with your feet. You might not even be conscious of what you’re doing but you will know ok, this is not a place where it would be good to sit at a patio, it seems to be a thoroughfare, a drive-through community rather than a patio community. The ROW actually slowed things down, made people feel comfortable walking, so now you see people, all kinds of folks just going up and down St. Clair. I love that Italian word passeggiata. I live four doors from St. Clair and I think there’s a nice culture of passeggiata now that has evolved on St. Clair. Patio culture is very strong and getting stronger, and I think some of it frankly is the way we changed mobility patterns on St. Clair. 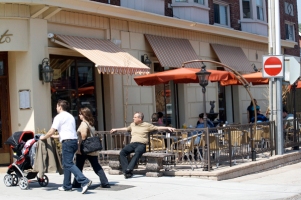 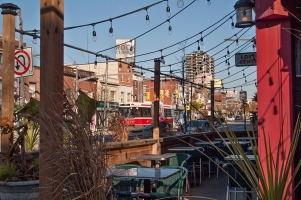 We’re about 10 years since the ROW was started – it’s in a very good place. All the pieces have not come together, the last and critical piece of course is the delivery of the vehicles and because of Bombardier’s late delivery issue we’re looking at 2018, even maybe 2019. We finished in 2009. So we are at the point of evaluating rental rates, throughput of people, what it has done to car volume and speeds, accident history… so I’m looking forward to that evaluation.

What people say is important, but it’s where they put their feet. They’re at the restaurants on St. Clair and they’re enjoying it. Their feet know that this is the place to be. And the same thing is going to happen on Eglinton. 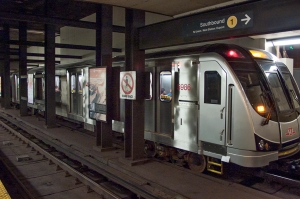 Not all of it is above ground, but even where it’s underground it’s going to change the nature of that street. And now that St. Clair is done, and once Eglinton is done, I believe people will say yes, and we’ll get off that subway, subway, subway mantra.

I think most of us, all other things being equal prefer to travel where we can see the trees, people watch, that’s what light rail provides. Subway is mole travel; it gets you there fast but not necessarily with grace or beauty. When I’m in the Yonge-Bloor area there’s two ways to go home: you can go Bloor-St. George and go up, or go up Yonge. I always go up Yonge – I like the streetcar, it’s just more pleasant. And I can make it from my house to City Hall in exactly 25 minutes with great reliability. Nine out of ten times I’ll scroll that number door to door – I time myself, too.

This article can be found in WHAT’S HERE in the section The City, and under BIG ISSUES in Transit..
We are @livingtoronto2 on social media. Follow us on