“Let’s shut down the street,” was John Montesano’s rallying cry, 15 years ago, about St. Clair West – an almost insane suggestion considering sections of the street were already suffering from localized closures and transit disruptions due to the construction of the dedicated streetcar lanes. 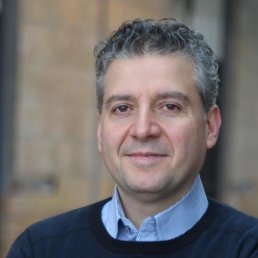 John is the creator of Salsa on St. Clair and originator and co-chair of The Stop’s highly successful fundraiser Big Night at the Green Barn also celebrating its tenth anniversary this year.

John says, “I’ve done two things in this community that are important to me, and they both come from the same place – we need to use our ethnicity or whatever we have in our cachet, to make better communities, to use it for civic engagement, to organize people for the good.”

John’s family emigrated from Italy and initially settled south of Davenport and Dufferin, then moved north of Eglinton and Dufferin, and then further north to the Wilson Avenue area. Always interested in a refreshing and distinctive take on Italian culture and identity in Toronto, he became the editor the eyetalian, a provocative magazine co-founded by a group of second-generation Italian Canadians (1993-98).

Eventually John moved to the St. Clair West area during the construction of the dedicated streetcar lanes. At the time, he was the vice president and general manager at Telelatino, a popular television station with Latin American and Italian communities. Right away he noticed the street was struggling. “People who were here were really suffering,” he explains, “So that partially was what motivated me. I’m in the neighbourhood now; I have my ear to the ground.”

St. Clair’s struggles before the right-of-way

Truth is, even before construction of the dedicated streetcar line, a changing demographic challenged St. Clair shop owners west of Bathurst Street. Business owners who should have renewed their businesses or retired years earlier served a dwindling customer base while dollar stores became the go-to businesses on the street. Consequently, some businesses could not survive the disruption caused by the lengthy construction of the right-of-way, made worse by an unnecessary court battle against the city.  Meanwhile, developers had been quietly scooping up St. Clair’s storefront buildings with a goal to buy up entire blocks for future development. As properties sold and leases expired, businesses left, storefronts were shuttered, and developers waited.

John’s sharp eye focused on St. Clair’s Latin American restaurants and businesses, the need for the street to do business development, and the lack of an identifiable city area for the diverse Latin community to call its own.

“I’ve never been a big fan of celebrating ethnicity for the sake of ethnicity or celebrating our background for the sake of a celebration,” John explains, “I’ve gone to a hundred of those, they’re fine, I don’t look down on that. But I feel they’re a plateau. I’m not a big plateau person. I ask, what’s the next thing we can do.”

John’s approach to Salsa on St. Clair originated during his time at Telelatino. He saw ethnic festivals produced in what he calls enclaves. He explains, “I was always pitching my boss the idea that we needed to become more of a part of the fabric of the city and he was a big believer in that. I moved into the neighbourhood and within a couple of months I called Joe.” He’s referring here to Joe Mihevc who was the City Councillor at the time.

John and Joe met at the now shuttered World Class Bakery. Brainstorming ideas led to the name of the street festival written on a napkin – Salsa on St. Clair. “Let’s shut down the street and bring the city here,” John enthused.  “I like it. Let’s do it,” Joe answered.John pitched his boss at Telelatino. Joe arranged a meeting with the local Business Improvement Associations (BIAs) and residents; John pitched them too. Joe lined up city departments and for six months John went to work organizing a weekend festival of entertainment. The idea didn’t come from inside city hall. “There was no policy,” Joe explains, “that said let’s develop something for the newly emerging Latin American community.”

“Let’s shut down the street and bring the city here,” John enthused.
“I like it. Let’s do it,” Joe Mihevc answered.

“The challenges,” Joe goes on to explain, “were getting the BIAs on board; getting the neighbourhoods on board; getting city hall on board to fund a piece of it, and getting city hall on board is not just one place: it’s road closures, TTC, police, ambulance, fire, solid waste management…those are six departments. Because they are all cash-strapped departments, they see this as a moneymaking opportunity, so they try to shake you down for money. Then you have to kinda push them back. Now it’s a pretty well-oiled machine.” 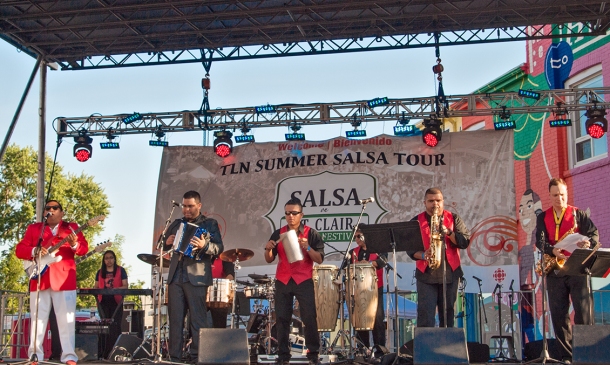 “The first year,” John remembers, “We just had the bands. I had five people working for me. I thought 5,000 people were coming. The weather was perfect. Everybody came. The cops pulled me aside and said, ‘We think there’s 80,000 people on the street.’ It was crazy.”

John’s vision worked. “Put barricades up, get live bands, get people dancing at every corner, we had instructors at every corner. It’s the engagement part. We said come and dance on the street. There aren’t a lot of places you can do that. Caribana is the closest but it’s a different vibe, it’s more of a parade.”

Today, the Salsa on St. Clair festival extends for a week in clubs all over the city and culminates on St. Clair attracting tourists from other parts of Canada and the United States. It is now a federally incorporated not-for-profit organization with TD Bank as a major sponsor. 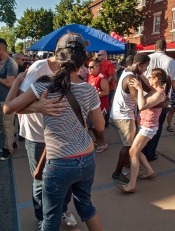 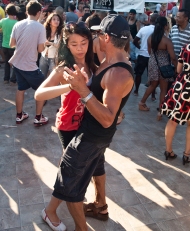 “Most bands are still local,” John adds, “A lot of those band members are world class, from all over the world. The amount of talent in the community is staggering. There’s also Salsa on Blue Mountain, which happens a couple of weeks before Salsa on St. Clair. They love it up there. It’s a constant sell-out.”

John’s enthusiasm is palpable. “I love the success. It worked for Telelatino, it worked for the street and it worked for the neighbourhood. It made the area pop. I’m still on a couple of committees. It was nice to be a part of that. Then, five years later I said I gotta do something else. When The Stop launched, I literally tapped Nick Saul, The Stop’s executive director, on the shoulder and said, I think I can help you get money from the Italian community with this backyard garden idea. It will resonate with a lot of people I know.” Ten years later Big Night at the Green Barn has raised $1,700,000 dollars. Every major developer of Italian decent is there.

John wraps up his feelings, “Sometimes I think we become removed from one another. This is the whole thing about community engagement – a big city, because of its hustle and bustle, can disconnect us … so I feel that Salsa on St. Clair and Big Night at the Green Barn are ways I connect myself to projects that leverage things that mean a lot to me, for the betterment of everyone else around me, including myself. I love it.”

We first wrote about the Salsa festival in 2015; read it here.

So much enjoyed your story of Salsa on St Clair on a napkin! Samba Squad will play there this week-end as always; everyone enjoys it.
Janet McClelland, Toronto