ecades ago when I first started teaching at York University, a colleague and I shared an office in the Ross Building. On the wall someone had attached a large black-and-white poster of a surreal scene that would be at home in a Buñuel film or in David Lynch’s recent resurrection of Twin Peaks: a man in a business suit sitting at a desk in the middle of a vast, snow-dusted field. He stares at us and seems to be waiting for the telephone to ring.

The man is Dr. Murray G. Ross, for whom the building was named, and who was York University’s founder and first president. His message, however, is a serious one: the Provincial government has granted us the land, but we need buildings for a functioning university. This photo dates from December 1962 and taken by a photographer from the old Toronto Telegram.

In the far background, some farm buildings are just discernible. The land, about one square kilometre or 457 acres (the largest post-secondary campus in Canada) was originally comprised of a few family farms, one of which was owned by the Stong family, for whom one of the colleges is named.

I well remember the hysteria that engulfed North America when this shiny globe with its antennae, just under two feet in diameter and weighing 184 pounds, began circling the planet, beeping for twenty-one days before burning up in the atmosphere. The effect was immediate and shocking. From the media and politicians arose cries of “falling behind” the Soviet Union in science and technology and the inferiority of American education in these fields. Federal funds were poured into research and educational programs in science and engineering. The local educational TV channel began broadcasting lessons in the Russian language. I remember seeing people on the streetcar reading the course kit that presented the Cyrillic alphabet and simple dialogues. (Today, York’s Russian section, once offering a major program, has been reduced to only one course in the Russian language: Elementary Russian.) In Canada, this perceived deficiency in science and technology was an impetus to found a number of new universities across the nation.

The other impetus was the inability of the older universities, such as the University of British Columbia, the University of Toronto and McGill, to accommodate the greatly increased numbers of high school graduates seeking post-secondary education. Governments responded by founding, in quick succession, Simon Fraser University in Burnaby, B.C. (1965), the University of Calgary (1966), and in Ontario: Lakehead University, in Thunder Bay (1965), Trent University in Peterborough (1963) and Brock University in St. Catherine’s (1963), and York University (1959; Keele Campus opened 1965).

The Keele Campus, as opposed to the earlier home of York University at the sylvan Glendon Campus, in the Bayview Lawrence area, is bounded by Steeles Ave. on the north, Keele St. on the east, Jane St. on the west, and Finch Ave. on the south. In the 1960s, 70s and for some time afterward, the Keele Campus was felt to be a rather remote corner of North York, a feeling deepened by the lack of adequate public transportation (the Spadina subway line was not built until 1978 to Wilson Station, and later in 1996 to Sheppard West Station).

Another factor that gave the Keele Campus a rough, frontier ambience was the choice of the architectural style of brutalism, then popular on campuses and among government buildings around the globe, from Japan to Brazil to the Soviet Union to the U.K. and North America and Australia. A perfect example of brutalism can be seen in the Robarts Library building on the University of Toronto campus, at the corner of St. George and Harbord Streets. Ultimately the style derives from the Swiss architect, Le Corbusier (1887 – 1965) and its name from French béton brute, raw concrete. The style exudes the permanence and solidity of a military fortress, and a deliberate Modernist horror of adornment, in favour of minimalist simplicity. In the 1960s several such buildings arose on the Keele Campus, including the Ross Building, a long, narrow nine-storey building in two end-to-end sections. One of my colleagues said that at night in the vast, near-empty building the only sound was the hiss of the air circulating system. He said he felt like he was aboard the Battlestar Galactica in deep space.

The Scott Library, the largest

building on campus, is another example of brutalist architecture, this time inspired by a kind of inverted ziggurat, that is, a step pyramid temple from ancient Mesopotamia. The library contains 2.5 million books. In keeping, I suppose, with the ziggurat inspiration of dim history, the interior of the Scott Library is reminiscent of the Hanging Gardens of Babylon.

From this huddle of stark, rather cold and impersonal buildings was formed the core of York University, massive edifices like outposts on a bleak, treeless, isolated landscape. Adding to this sense of desolation, especially in winter, and to the stark plainness of the main buildings, was the industrial neighbourhood on the opposite side of Keele St., a major depot for gasoline and oil. The huge tank farm with its constant coming and going of enormous tanker trucks is still there today.

Yet, today York has been radically transformed into a vibrant, lively campus of beautiful new buildings, modern yet colourful, and throngs of students hurrying from classroom to classroom or, in good weather eating their lunches along the long reflecting pool at the campus entrance. 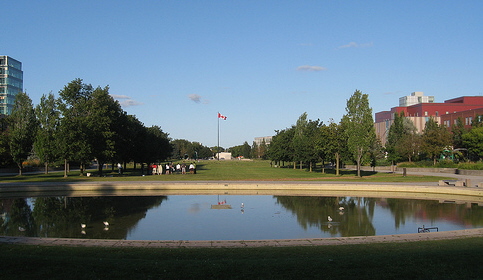 One example of this transformation is Vari Hall, a round building of orange brick that in addition to providing much needed new office and classroom space, also has become a centre for student activities. In the generous rotunda on the first floor are daily exhibits of every conceivable ethnic, religious and political cause, plus conservation and social issues from Save the Whales to ending racism and homophobia. The two wings of the building are connected by corridors with floor-to-ceiling glass. The overall effect is of giant arms welcoming students.

Another advantage of Vari Hall is that it hides a good deal of the Ross Building. Below is a photo of the archway that connects Ross South from Ross North. Whenever I stand beneath it I think of Sir Kenneth Clark’s words in Civilisation (p. 252), where he says that entering the “huge, unfriendly forecourt of Versailles” filled him with “a mixture of panic and fatigue”: the scale is meant to embody the power of the state and to make the individual feel small —”as if it were my first day at school.” In this case, the sheer mass of all that heartless concrete unintentionally has the same effect.

To paraphrase Clark again, the greatest buildings reflect the dominant force in a society: in the Middle Ages, cathedrals and in the industrial age, skyscrapers (p. 322). I would submit in our technological age it is buildings dedicated to science, especially computing and engineering. Fortunately, these new buildings at York are beautiful, especially the Bergeron Centre for Engineering Excellence, which opened in 2016. Both its exterior and its interior are stunning. According to York’s Media Relations, “The design drew its inspiration from Georgian Bay and the iconic Canadian image of a cloud floating over a rock”. The Centre is also the home of the Lassonde School of Engineering.

The TEL (Technology Enhanced Learning) Building opened in 2003, as a joint venture between York and Seneca College. Its purpose is to foster interactive learning in computer labs and classrooms whose design is flexible enough to keep pace with changing technology. It looks most impressive at night.

An important factor in integrating York University into the Toronto urban environment has been the extension of the Spadina Subway Line, which is due to open at the end of 2017.

During the school year, hundreds of busses bring into the campus students from Toronto to the

south (TTC), Markham in the east (Viva), from Brampton in the west (Züm) and GO Transit from further afield. The idling busses produce fumes and their engines create a constant background noise. Much of this volume will be eliminated once the new station and those north of it (Pioneer Station, which is also on the York campus; Highway 407 and Jane St.; and Vaughan Metropolitan Centre at Jane and Highway 7) are in service, hopefully at the end of 2017.

The last factor that has helped end York’s disconnection from Toronto is urban sprawl. York in its corner of North York has been engulfed by a great population increase in York Region, which begins just on the north side of Steeles Ave. The municipality of Vaughan, which includes Maple, Woodbridge, Concord, Thornhill and Kleinberg, was incorporated in 1991 and had a population of 111,359. By 2015, Vaughan had a population of 320,530 residents, an increase of 187%. Just north of Scarborough is Markham, with a population of 353,000 (in 2006 the population was 261,573). Many students from Markham take the GO bus via Highway 407.

York University is, nevertheless, a commuter college in the suburbs, and one mark of this is that it has its own shopping centre, York Lanes, with many of the stores one would see in any small shopping plaza: dentist, doctors, banks, drug store, cleaners, restaurants, clothing store, post office, a sense of déjà vu for anyone who lives outside downtown.

There are, finally, two odd and often overlooked features of the campus. The first is the Central Utilities Building, which everyone calls the Smoke Stack Building. It’s the home of York’s heating system and physical plant. What is odd is that it contained classrooms. It was the first building I taught in. The classrooms looked as if they were originally for draftsmen and their tilted drawing boards. The second is far more important but generally neglected by the students as well as the public: the York Observatory. York offers undergraduate and graduate programs in astronomy. One dome contains the 60 cm (24 in) Cassegrain reflector, while the other houses a 40 cm (16 in) Cassegrain telescope. The observatory is open to the public on Wednesday evenings. You can see schedules and other information here.

York University from rather humble beginnings in 1959, under almost pioneer conditions, has emerged as Canada’s third largest university (over 52,000 students), with a law school (Osgoode Hall), a school of nursing, a school of engineering and computer science, and the world-famous Schulich School of Business. It has weathered numerous strikes by contract faculty, and it has suffered from the ills of urban poverty and crime. It has transformed its original uninviting nucleus of concrete blocks to attractive, futuristic buildings. The Keele campus now includes the Aviva Centre for tennis tournaments and the York Lions Stadium, originally built for the 2015 Pan-American games. York University has grown with Toronto in size and sophistication.

Ross has issues but is also amazing, was not well served by hiding/attacking it with Vari, rather than mediating it. If ever I win the lottery I will give YorkU $$ to power wash Ross, and make the terrace a great place to be again.
Cheryl Dickie, Toronto

The Ross building use to remind me of a castle with the centre archway as a drawbridge. Kinda sad it’s hidden.
Donna Donnelly, Toronto

Fabulous article! The PanAm/#YorkULions stadium from my lab window @YorkUGroundhog in that daisy patch right of the stadium fence.