Patrick Harris is a 12-year-old grade six student in Toronto. He describes a recent weekend adventure… 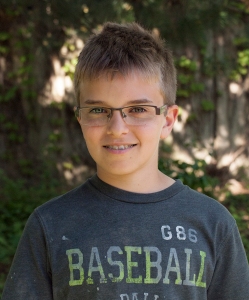 Our family and our friends went to our cottage, we call it the farm. It has open fields and my dad’s friend likes to hunt there sometimes. He took us – me, my brothers and his son, out to go hunting. The first day we didn’t get anything, no turkey showed up. We had woken up at 6:30 a.m. and we missed them. Then the second day no one else wanted to go except for me to the hunting expedition. I woke up at 5 a.m. My brother was going to come but he said he was just too tired so he went back to bed.

We took a golf cart to the field with the equipment – a bow and arrows and the turkey decoys. We had already set up a tent out there. It was nice to be out there that early. When we got there the fields were flooded, there were lots of mosquitoes there. The farm is on an island and the lake has risen four feet since last year to this year, it’s really crazy. It’s almost swamp, really, just puddles everywhere even though it didn’t rain before that.

We put down the turkey decoys – you put stakes in the ground and then you put decoys on them. They look exactly like turkeys, they’re just made out of rubber. Hunting season is the mating season; it starts in March, I think. The males come out and challenge the other males; that’s what the decoys are for. They’ll hit the decoys, and they spin, and they’ll be like “come on, man, fight back,” and then they’re confused like “what, why is it spinning?” and that’s when they get shot.

When the decoys were out we went into the tent. Nothing happened for like an hour and a half. Then we saw two turkeys on the other side of the field. So we got the bird caller, which is a small wooden box that makes the sound of a turkey when the cap is rubbed against the box. We lured them over with turkey calls to the place where we were. That took us like 15 minutes.

They sense movement really well, so you can’t move when they’re close because they’ll see. That’s why we have the tent, and we have the back of the tent windows closed because their vision is 2-D and they have no depth perception. The front flaps are open but they just think it’s black and they can’t really see you, they need light on you to see you.

Once they were close to the tent one of them was standing behind the other. If we had shot that turkey, the shot would have gone right through it and hit the other one. That would have been an illegal kill and you could get a fine for that. So we had to wait until they separated. Once they did we got the bow out and shot it. It hit the head, so it almost missed. After we shot it there was a moment of silence that lasted about 5 seconds and then we started celebrating, high-fiving, yelling, “Turkeys!”

We went out of the tent and saw the turkey still flopping around on the ground like it was in pain, so my dad’s friend stepped on its head to kill it. We could see a wound in the head but we weren’t sure because he was aiming for the chest, but you could see its brain. We looked for the arrow but we couldn’t find it. We figured the arrow must have redirected off the head, off the bone.

We loaded the turkey up into the golf cart and we drove back, and all the guys were jealous that they didn’t come and we caught a turkey. Then after that we plucked it. You pull the feathers out one at a time. Some of the feathers are not really attached deep in the skin, so you can take them off easily by the handfuls, but all the other feathers you have to take them one by one or you tear the skin, which wrecks the meat. 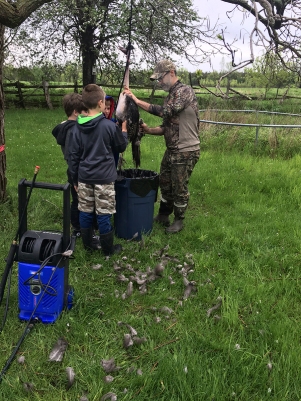 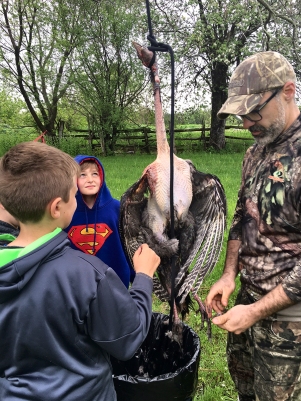 It’s raw meat, and warm too. Once we got it totally plucked I took out its guts and its heart and stuff. To do that you have to cut it open and there was blood and urine all over my hand, all over my arm. There was this feeling – usually when you touch turkey meat, raw turkey meat, you think ‘oh, if I put my hand in my mouth I’m going to get a disease’, but there was a feeling that you could do that and not get a disease or you could eat it raw because you know exactly where it came from, that’s what I thought. (N.B. He did not lick his fingers.)

We left it there outside to get it cold or else it would spoil. We made a brine of salt, onions, thyme, rosemary and stuff like that and we boiled it and it was really, really salty. Very salty. Then we put the turkey in a cooler and poured the brine over it. We put water from the hose into the cooler to cool it down and then we packed it up into the car and we left to go back to our house. 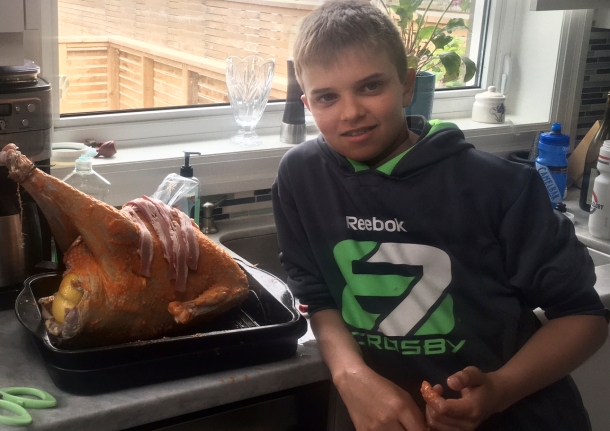 We cooked it that night, and it was pretty awesome. It barely fit in the pan. It was a different taste – I liked it. It was sort of like tangy; it tasted different from a turkey raised on a farm with other turkeys. It tasted natural, that’s what it tasted like. When I gutted it and went into its esophagus there were still dandelions in there.

It was a good experience that not many kids my age get to have. Now I know how long it can take just to find a turkey out in the wild and kill it. It took us two hours. But on a farm to kill it pluck and prepare it takes five minutes. So it seems like eating farm turkeys is too easy, like something is wrong with them, not natural. We had to work hard to get it, but with farmed turkeys it’s just machines that behead them, gut them and pluck them and then shoot them off into containers – doesn’t seem that hard. Cleaning it I didn’t feel grossed out, I felt like it was a natural process.

I never went hunting before. It was really interesting how you put in all that work, you get something out of it. We’re at the top of the food chain, so kind of take advantage of that. 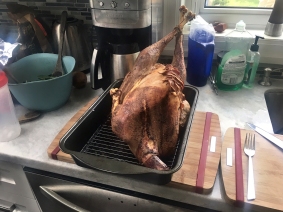 Those two hours we were waiting didn’t really feel long. We saw a deer – it came out into the field. We couldn’t have shot it though because that would be illegal. You can only hunt them in the fall and winter. Lots of rules around hunting. This is turkey season now. The idea of Thanksgiving, that you have turkey for Thanksgiving dinner, the idea of that is that you’re rich enough to afford a turkey out of season. I guess they farmed turkeys, they had like one prize turkey. But Thanksgiving dinner would be deer – that’s what’s in season then.

It was really fun. Some people may classify it as boring but it was fun. Bows are simple, they’re just wood and string, and arrows are wood and metal. But a gun, it’s machinery. If you want to hunt you probably want to use something natural, kind of natural at the very least. The turkeys were really close to us, like 20 yards or 10 yards, really close. It would be so unfair if the turkeys were like 70 meters away and you just shot them with a gun. It doesn’t give them a chance. You’ve always got to give them a chance, the turkeys.

This article can be found in STAYING IN in the section What We’re Making.
We are @livingtoronto2 on social media. Follow us on