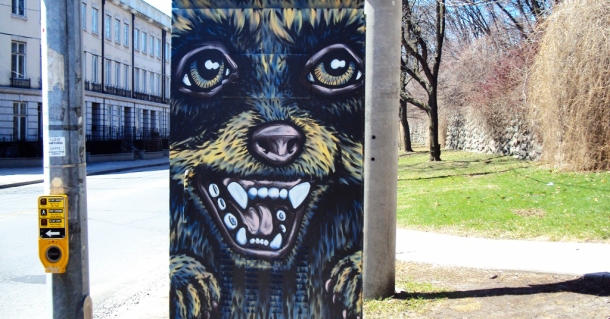 Toronto’s Mayor John Tory and his entourage were giddy at the news conference announcing the new raccoon-proof green bins, declaring, “….we cannot be defeated by these critters.” At first, I was giddy, too. But then, the new green bins, which will be introduced next year, prompted a neighbour to pass on a sobering raccoon tale that involves a backyard vegetable gardener. You know where this is going.

One day, the gardener was watering his vegetables when he saw a raccoon family emerge from his neighbour’s roof. The critters had burrowed through wood and shingles. They had fully detached the down pipe, and they had chewed through several rungs of a porch railing, loosening it from its anchor, and toppling it over onto the ground. Fearing an invasion, the gardener sprayed the critters with water, hoping to deter the group from entering his garden. The mother raccoon quickly moved her family of awkward tweens back inside the roof, and waited. She waited and watched.

The gardener turned his attention to his much-loved grapevine. He had rigged up an elaborate trellis made of wire and wood to support the budding grapes. Every day, he would trim back growth, remove dead foliage and redirect robust tendrils. That day, to protect the grapes from wrens and robins, he painstakingly swathed the grape bunches with a mesh covering, leaving a few exposed for birds to eat.

Destroyed. Shredded leaves, gasping tendrils, and sour unripened grapes lay scattered on the ground. It was as if a tornado hit the vine, a tornado of revenge. Raccoon revenge.

The story got me thinking. How would I feel if I were a raccoon and all of a sudden, my main food source got locked up. Last year, after a long cold winter of inedible frozen garbage, a friend, driving east on Davenport Road and approaching Bathurst St., saw a raccoon scurry across the street with a rat in its mouth.

It’s a cruel city when even rats aren’t safe so lock up your pets and say good-bye to your vegetable gardens. Keep your potted plants indoors and forget about that designer patio furniture and patterned pillows. Roll up your outdoor rug and board up your screen doors. Put your roofer’s number on speed dial. Raccoon revenge is coming.

– Elizabeth Cinello
Photos by Elizabeth Cinello, Alan Vernon, and courtesy Wikicommons
Raccoon Mural by Jeff Blackburn. Located on Davenport Rd.,
at the bottom of the Baldwin Steps near Casa Loma.

And if you think you’ll avoid them by going 700 feet up on a construction crane, just ask Rob McFarlane, the crane operator who posts from the top of the L tower in downtown Toronto. He put this photo on his Twitter feed.

This article can be found in WHAT’s HERE in the section The City.

Wow – the raccoons in the photos are vicious! Smart though. Best of luck, Toronto.
Jo Lampert, Australia

Never thought of that – ravenous, furious raccoons all over the city – very scary!
Carol Phillips, Barrie ON

Hurray for Racoon Revenge! Having to clean up a bit of garbage once in a while is a cheap price to pay for those cute critters.
Herman Rosenfeld, Toronto