In this Issue / Public Space/Public Art

Public space that is inviting and functional, in a metropolis like Toronto, is a vital element of community. Public space that includes public art plays an even more important role in the social fabric of a city. Gathering places that have a focal point – whether it be artwork, performance space or an impetus for physical activity make a city vibrant and invite residents to interact.

In this issue we look at shared spaces in the city that invite, engage and challenge. From the urban forest trails that weave their way through our neighbourhoods to new public artworks that are created as part of Toronto’s condo boom, to community efforts that involve residents meaningfully, here’s our take on what’s out there and how it’s happening.

In this issue, over the next few weeks, here’s what’s coming on the topic:

AND IF YOU KNOW WHERE YOU STAND…

In a small corner park on Vaughan Road is an artwork called the Community Totem, created by the people who live around there. The installation grounds that little park in time as well as geography; in depth of history and in breadth of the local population. 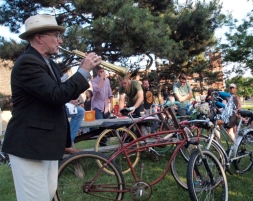 THE CITY AS CYCLISTS’ GALLERY

Art Spin is a local art event and tour on bicycles. Two of our intrepid contributors took the challenge on a recent summer evening. They saw art installations, performances (musical and theatrical) and had some great food.

SCHOOL ART: Form Can Be Functional

When an aging Toronto school needed to be rebuilt, the school board came up with an innovative idea. Here’s how a neighbourhood got a new green school, a public athletic field and some great outdoor artwork to be enjoyed by all. 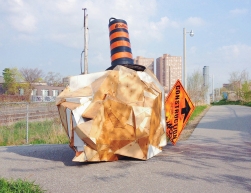 What was that the geodesic plywood and scrap construction? And how did it change over time as people added messages, signs and pylons? Collaborative art? Perhaps.

With no big blocks of real estate left for parks in our dense urban landscape, the city has been creating public areas in the spaces between and around new condos and commercial developments. These are POPS (Privately Owned Publicly-Accessible Spaces). How do they work and how can we use them? 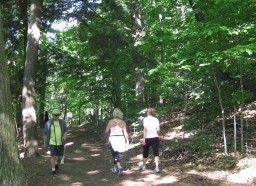 A WALK IN THE WOODS: Discovering Sherwood Park

What’s a walk in the park without dogs, kids, fitness fanatics and a creek to refresh everyone? Well maybe just the dogs do the refreshing. It’s all at Sherwood Park in north Toronto.

Our contemporary public square may be the internet, but China exerts state power and alerts us to the limits of freedom on the web.

ART IN THE CONDO CANYONS

Facing the wall of condos that separates the city from the lake we encounter astonishing new public art. Here’s a sampling. 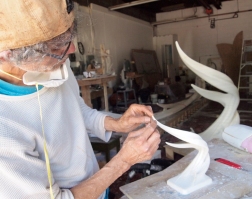 We follow a sculptor as he proposes and gets a commission then proceeds to turn the winning concept into a larger-than-life work of art that will withstand the ages.

The lack of open space in overcrowded neighbourhoods created a visible problem a century ago. Children played in hazardous storage yards and vacant lots, were exposed to disease near waste disposal sites and were struck down by vehicles. Local reformers tackled the problem through the Toronto Playground Association.

A project for Nuit Blanche 2014 will transform the windows of Sanderson Library at Scadding Court into a contemporary urban canvas through video projection and live drawings of contrasting Toronto cityscapes.