The starting point for the first Art Spin of the summer (and my first ever) was Lamport Stadium, and when I met up with my friend Suzanne she immediately headed us toward the snow cone stand. We strolled and licked our limey ices and, as people gathered, we took in the decked out and decorated bikes, the elaborate custom sound system bike trailer blasting out music, the team of bike tuners and tire pumpers, the tiny bike-mounted art gallery.
Click on any photo to enlarge. 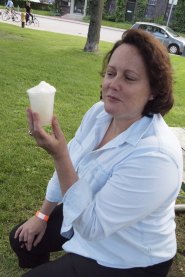 Art Spin is a local art event and tour on bicycles. Here’s what they have to say for themselves:

The primary goal of our events is to produce new creative content in alternative venues and to bridge the gap between the art world and the general public. Our events aim to be accessible, inviting and fun, while also being educational, critically engaging and thoughtfully curated.

Art Spin challenges traditional contexts of exhibiting art and brings work outside of a traditional gallery context, into unique and unorthodox spaces. Art Spin’s geographical route is just as curated as the artwork, and as a result neighbourhoods are temporarily transformed, with their inhabitants seeing familiar streets in a different light during an Art Spin tour. 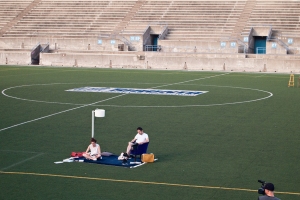 The first art of the evening was a very funny domestic drama performed on the soccer pitch inside the stadium. After that we mounted our bikes and were off, riding en masse down narrow, tree-lined side streets, with floating melodies of jazz standards played by a lone trumpeter amidst a cacophony of bicycle bells, yappy dogs and frontporch sitters clapping and cheering us on, calling out “Happy Pride!” and “Happy Canada!” It felt like we ourselves were an event, a parade.

Getting us safely along major streets requires a team of ‘corkers’ (or ‘fluffers,’ as Suzanne kept referring to them because she couldn’t remember that term). They held traffic as we passed and entertained and placated drivers while they waited. But for most of the ride they weren’t necessary. We were led on a well-planned route through narrow residential streets, back lanes and bike trails such as the Rail Path. We started at King and Dufferin and ended up on Vine St. in the Junction. 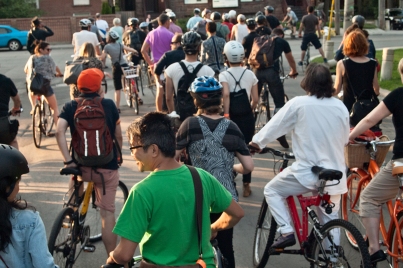 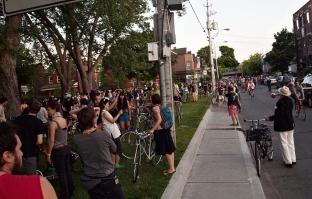 The evening dog walker regulars and children playing in the twilight were surprised to see hundreds of bicyclists arrive at their local park. As we all surrounded an installation, a large wooden sculpture of bolted together 4x4s, a ten-year old boy on his bike called out to his friend, “Hey David, look, they’re all worshipping the god.” It did look that way.

We visited installations and performances in a small neighbourhood park, a parking lot, an art gallery whose current photography show Wakhan, Another Afghanistan was the venue for a musical performance by the Toronto Symphony string quartet, and ended at a gigantic old warehouse for a major group exhibition and party and a most welcome food truck serving great braised short rib sandwiches. The art was varied and for the most part interesting, and the audience was engaged and attentive. The party was still going strong when we left at 11:30. We had planned to take a bus home and surrender our bikes to the rack on the front, but there seems to be no transit out of the Junction, so we wobbily pedalled our exhausted way home.

This article is part of our issue: PUBLIC SPACE/PUBIC ART