How long does it take to become Canadian? Not simply to obtain citizenship, but for an immigrant to be at home here in Canada. The main conclusion of a just-released report is that even after living in Canada for decades, if you lose your job you are worse off than when you arrived here.

At Progressive Moulded Products (PMP), the largest auto-parts manufacturer in the Greater Toronto Area, 97% percent of the workers were immigrants, 87% ESL speakers. In June 2008 PMP filed for bankruptcy protection and without warning closed their operations. Though the workers resisted the closure with a blockade, the company obtained a legal injunction to remove them, and they were left with nothing. 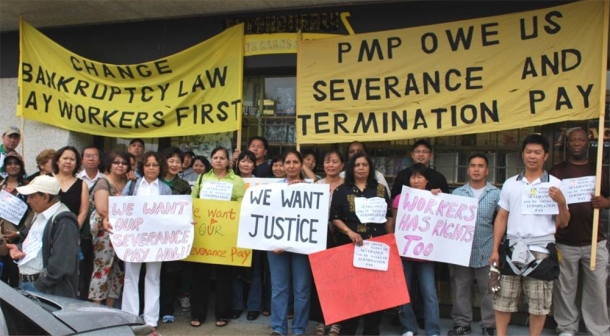 Ryerson University released a study of these workers in July 2013. “We were interested in finding out how this group of workers has managed since the plant closure five years ago and whether they have found stable work again,” said Winnie Ng, CAW-Sam Gindin Chair in Social Justice and Democracy and lead author of the study documenting the experiences of 78 of the 2,400 workers who lost their jobs.

PMP workers were in a long-term, non-precarious, standard employment relationship for years, even decades, and, as such, might have been considered successfully ‘settled’ and ‘integrated’. “Nearly half of the research participants are now working in temporary jobs with poverty wages and no benefits. Our findings show that they are worse off than when they first came to Canada,” says Ng. “The economic crisis has ‘unsettled’ these long term immigrant workers in a highly competitive and precarious labour market. The systemic barriers of race, gender and age further marginalize this group of workers.”

For many immigrant workers, their immigrant status never disappears.

Settlement and integration are typically a continuum. People use settlement services when they first arrive (e.g. referrals for housing, healthcare, schools, employment, language training, re-certification). Integration refers to the long-term, two-way process in which immigrants and refugees become full and equal participants in the social, political, cultural and economic life of the community. However, their struggles to find appropriate training and stable re-employment in the years after the closure suggest that, for many immigrant workers, their immigrant status never disappeared. After more than half a lifetime of working in Canada, they found themselves faring worse than when they first arrived. In addition to the challenges that all older workers face in making a second career transition, these workers are struggling with being ‘immigrants all over again’, without access to even the limited settlement programs available to new immigrants since they no longer fit that category.

The loss of good jobs due to the plant closure had a domino effect. Community networks and supports were lost. With the loss of income people struggled to keep their homes and families intact and to continue to contribute to their communities. In the words of two of the workers:

“When I came to this country in 1986, it was a pride just to see every woman and every man going to work every day and every morning. They did not have any hardship facing them. Now everyone is trying so hard in their houses, crying so hard, they wish they could turn back the clock.”

–  based on a report by Winnie Ng, compiled by Schuster Gindin