I was just a little girl living in Toronto when Expo ’67 presented Ontario with the best theme song ever. We belted out the lyrics in classrooms throughout the province that whole year. It was remarkably satisfying to sing it out in unison: A Place to Stand, a Place to Grow, Ontari-ari-ario. Hoaky or not, the tune brought tears to our eyes. There was just something about it.

I grew up in a privileged part of the city, on Heathdale Road near Bathurst and St. Clair. At the end of our street was Cedarvale Ravine, filled with squirrels, chipmunks, skunks, cardinals, blue jays and robins. As kids, we spent many days there, riding double on our bikes down the hill. Heathdale Road was on the edge of multicultural Canada – at that time Italian, Greek, West Indian, Jewish. It was urban Canadian life at its very best – popsicles in summer, TV dinners in winter. As I got older, I understood myself as completely, utterly urban. I recall the excitement when the new Spadina subway line was built making it even easier to go downtown. I spent my teenage years hanging out in discos and around the Smokestack at Vaughan Road Collegiate. 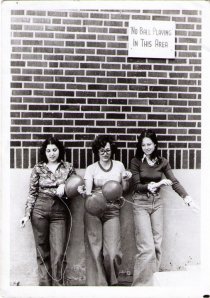 Jo is the girl slouching on the left

Later, I went to university, got all political, went to Nicaragua, became an adult, became an English teacher, had relationships. Grew up urban and Canadian, without giving it much thought at all. I was Jo, and I was Canadian.

One day in 1990 I was sitting in the staffroom of Seneca College where I taught English. I was a bit bored, newly single (heart marginally broken), a bit ants-in-my-pants restless and I picked up a binder from the table. Turned out it was from an Australian bloke looking for a Toronto teacher to exchange with (he’d met a Canadian girl backpacking and…well…you know). That night I phoned him and by the next day the deal was done. I was young and I gave the decision little thought. It sounded like an adventure so off I went to Cairns in North Queensland, Australia. Here’s what I previously knew about Australia: Crocodile Dundee, kangaroos, Sydney Opera House, On the Beach and…nope. That’s about it.

I flew out of YYZ on December 31st (-25C) and stepped off the plane onto the airport tarmac in Cairns on January 2nd (+35 degrees C).

Here are some of the things I learned that year: a truckload of Australian slang; how to camp (turns out this is quite different from how to ride a subway); how to pretend to feel comfortable stripping naked and swimming in a waterfall; how to shear a sheep (well maybe not, but I watched) and all about Aboriginal dispossession, something that shamefully had been invisible to me in Toronto, though its repercussions in Canada paralleled what I learned in Australia.

And I fell in line, doing exactly what mother warned me not to do. I met an Australian, married him, shuffled back and forth for a few years while we had children and dithered about, and then ended up – gulp – permanently living in Brisbane, Australia (though lucky enough to return, regularly, to Toronto). Now, it’s more than twenty years later (which cannot be the case, but is…)

When I am in Brisbane, I call Canada ‘home’; when I am in Toronto, I feel Australian. My weird hybrid accent now gets mistaken for Irish here, though I haven’t an Irish bone in my Jewish/Canadian body.

I get stupidly excited when I am in Toronto by inane things such as buying snack packs of nuts and bolts and red liquorice; purchasing bus tokens; ordering my coffee double double (instead of getting a ‘flat white’), ordering pop (and I don’t even like it – I just like saying it); looking at fire hydrants  (we don’t have them here). I like going into Roots (a word which here means something different, and dirtier). Moving from an English-speaking country to an English-speaking country (sort of) is a strange, surreal kind of immigration. Humour took me a long time to understand. The myths are true. Canadians are gentler and more polite while Australians (that’s me now, some of the time) are sharper-edged with a more teasing sense of humour.

I also had to learn new body language.  This Australian wink means, “I like you, just kidding, don’t take it so personally”. I stopped being offended quite so easily when I moved here. I also stopped feeling like I had to share all my feelings. Here, that’s not so much a sign of emotional health as proof of emotional wankiness. Shut up and get on with it. It’s an adjustment and still, when I’m ‘home’ (and I mean Toronto now) there’s a bit of me that feels more ‘true’ – not a very postmodern identity position, but it’s the way it is. But sometimes now I’m this, and sometimes now I’m that. Sometimes I sit in cafes drinking martinis (that’s Toronto) and sometimes I camp with mates drinking caprioscas on the beach. Turns out that’s not so different after all.

I still tear up at A Place to Grow and don’t start me on Joni Mitchell’s Blue (or even The Barenaked Ladies or even Feist – well after my time) but I can get equally gushy over Australiana as well. If I have a home in Toronto, I also now have a home amongst the gum trees.

Jo Lampert’s family and friends love the way she loves Toronto. She stays connected to her native city even from faraway Australia where she lives and works. Her friends can count on her Aussie passion to introduce them to new Toronto experiences like Gailey Road Productions’ event Women Writing Letters.

Four times a year, the company invites a panel of women artists to write a letter on a theme and read it out loud to an audience. January’s theme was A Letter to My Hometown.

The event featured playwright Shirley Barrie, singer/voice teacher Jen Cook, playwright Diana Tso, and our own Jo Lampert who based her letter on her piece in Living Toronto’s Finding Home issue – A Place to Stand, a Place to Leave? How in the world did I end up in Australia? Cake, door prizes, and socializing followed.

Lampert met Tara Goldstein, a professor at OISE (Ontario Institute for Studies in Education) and artistic director and co-founder of Gailey Road Productions, in Australia. The company produces “research-informed theatre on social, political and human issues that affect us all and promotes women’s work both on and offstage.” Plays tour schools, universities and conferences, and have been staged at The Toronto Fringe Festival, The Queer West Festival, and the Toronto Pride Festival.

The next Women Writing Letters event, A Letter to My 16-year Old Self, is on April 13, 2014. The view of our city from OISE’s 12th floor Nexus Lounge, where the event takes place, is gorgeous and offers a bird’s eye view of the Michael Lee-Chin Crystal designed by Daniel Libeskind.

I just love your blog, and lately really enjoyed “How Did I End Up in Australia?” (that brought a tear to the eye as I have also come to love the gum trees and the rainbow lorikeet.) Also your pumpkin pie photo essay, as my expat Aussie daughter tries each year to introduce her mates to pumpkin made into a pie. Pies for everything in Australia, but pumpkin?? That’s weird!
Beth Oram, New York City