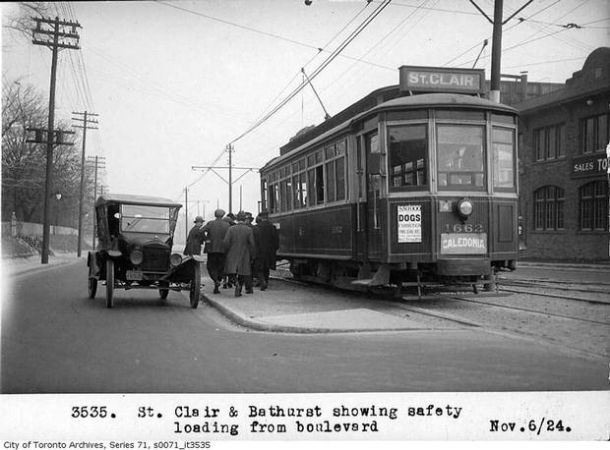 One hundred years ago, as the Wychwood Barns Community Association (WBCA) points out, St. Clair Avenue was Toronto’s northern city limit; a dirt road with few commercial or residential buildings. The first streetcar heralded the beginning of the neighbourhood’s development and the creation of the thriving and diverse community we enjoy today.

To celebrate this anniversary, the WBCA along with the TTC and many volunteers, organized several events at the Barns and along St. Clair, including an opportunity to tour the TTC’s only surviving Peter Witt streetcar at the Oakwood loop, historical chats while riding a vintage PCC streetcar from Bathurst to Lansdowne and a video retrospective about the area.

I always imagined that the bell on the streetcar rang when the driver pulled a cord, although I never saw that happen. Then I explored the oldest streetcar in the city, and now I know that it’s rung by stepping on a button on the floor. Watching a two-year-old girl ring it over and over again, I could appreciate that it’s so much more satisfying to stomp. 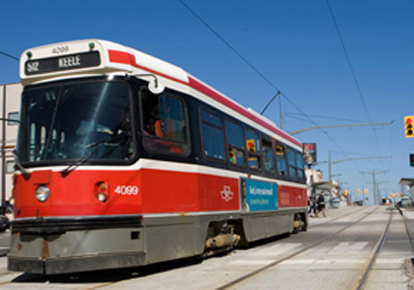 It is exhilarating to ride the St. Clair streetcar as we whiz past all the cars, unimpeded by traffic congestion. The tiresome fact is that mentioning the streetcar on St. Clair often evokes knee-jerk responses to the recent reconstruction of the St. Clair Right-of-Way. I guess in Toronto public meetings to argue about transit is our modus operandi. Notice the date of the meeting to discuss streetcars on this historical poster? That’s 1888! It was very nice to celebrate our one hundred years of good transit fortune here on St. Clair.

Starting the next 100 years

Test run of the new streetcar, heading eastbound on St. Clair at Oakwood.

The TTCriders organized a series of mass deputations at the TTC Board and City Budget Committee hearings on December 2, where our august representatives agreed to raise fares and not improve service, in the face of increased ridership.
At the Budget Committee – staffed with councillors associated with the “right” – there was a nasty exchange between Jess Bell of the TTCriders and Frances Nunziata. Jess argued against the fare increase and for improved service, funded by the city and province, when Nunziata croaked out some negative comments about the St. Clair right of way being partly responsible for the need to raise fares. It was an embarrassing moment, (for almost everyone in the room, except Nunziata and Doug Ford, also on the committee).
Herman Rosenfeld, Toronto