Rouge Park is the only place to camp legally within the city limits, because it is a provincial park. Lush foliage lines the banks, and a footbridge and GO/VIA rail bridge traverse the river. Trains passing regularly overhead do not seem to disturb the tranquility of fishers drinking their Timmy’s and kayakers paddling by. Follow a short path beside the river to its mouth at the lake. There you are, facing sky and water to the horizon on a wide, sandy beach with a walkable-for-miles shoreline. Just be sure to avert your head from the far left shore or you will be face to face with the Pickering Nuclear Power Generating Plant.
Click on any photo to enlarge 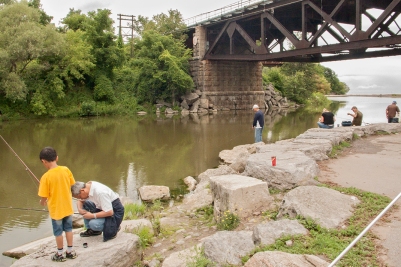 We arrived before the water quality figures, and were told that the red flag was precautionary; there were no measurements taken for two days because of waviness. We braved the water until the red flag was confirmed for the day. (No ill effects.)

Sand/Rock Ratio
Sand is soft, full of yesterday’s sand-castles. Some pebbles at the shoreline, a sandy bottom under water. Easy walking to swim depth.

Water Clarity
The water was greenish-greyish, only in part because of the cloudy skies. Smelled fresh but did not look clear.

Life Guards
They did not enter the water because of the red flag. They were informative and when definitive info arrived warned us out of the water.

View
No city view, no CN Tower. Clear open lake to the horizon, sandy and wild shoreline. That is, until confronted by Ontario Hydro’s nuclear dependence on the shore to the east. But the Pickering Nuclear Generating Station is a reality, and to paraphrase Philip K. Dick’s definition of the word, when you don’t see it, it doesn’t go away.

Dogs
No dogs, but very few people either on this blustery morning.