Roast Butcher and Fine Foods has recently been opened on St. Clair West by Ben Latchford, an experienced butcher and a 5th generation Torontonian. 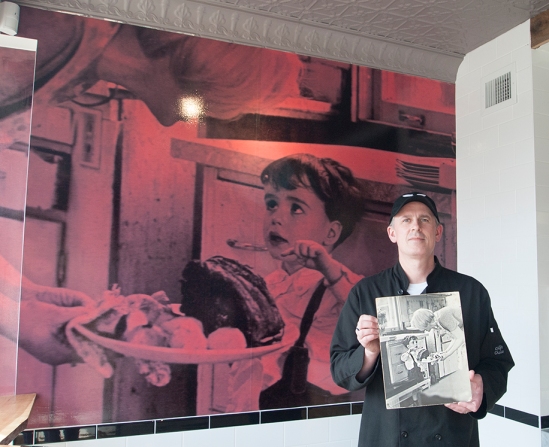 Prominently displayed at the front is an enlargement of a photo, originally exhibited at Expo 67, taken by his mother Canadian photographer Joan Latchford. It is a charming image of a small boy getting a preview of dinner as his mother bends down to his eye-level holding a platter of roast beef. Ben has the original black and white image, a print made by his mother in her darkroom. That photo both reflects the name and inspires the look of his shop, which is meant to evoke an old-fashioned general store. It is a very sleek contemporary version, with its pressed tin ceiling, marble counter, gleaming white tile walls and polished glass display cases; crammed but not cluttered with a variety of premium quality food.

Roast is a full service butcher shop featuring naturally raised local meat. Dry roast beef is aged in a special case where the roasts with their dates are displayed behind glass doors. Eggs come from heritage chickens raised on a small farm, in each carton a variety of pastel colours. Fridges and freezers are stocked with specialty ingredients such as duck fat and veal stock. 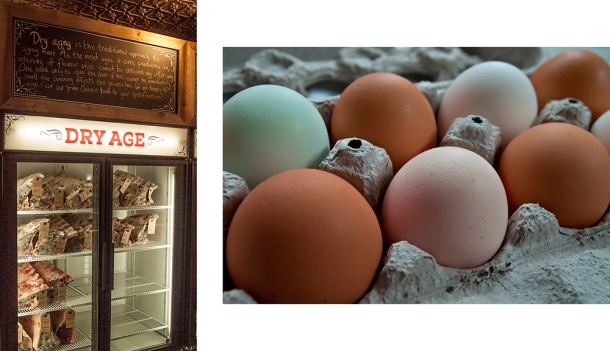 Behind a glass wall at the back is a full kitchen where dinners are prepared and made available fresh or frozen. In the freezer I noticed a variety of entrees such as chicken pot pie and red sauce with meatballs. Fresh for today’s dinner was pork tenderloin with asparagus and squash/potato mash.

As I looked at the wide selection of quality ingredients I felt an enthusiasm for cooking which had waned as this winter has dragged on. Perhaps it was also generated by the friendly welcome of the proprietor and by the reminder implicit in his mother’s photograph of the pleasure in making good food to share.