Char the peppers on the barbeque, turning them until they become black all over. Remove the charred skin; it will peel away like a fine sheet of paper. Cut the peppers in half, core and remove the seeds. Place them in a colander over a bowl because they’ll release a bit of liquid.
Pack the soft fleshy pepper halves into freezer bags. Roll out the air, seal, and freeze. When you want a taste of summer, defrost a bag, cut the pepper halves into long strips and season with chopped garlic, parsley, and olive oil. 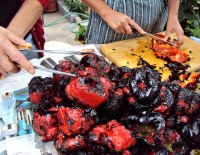