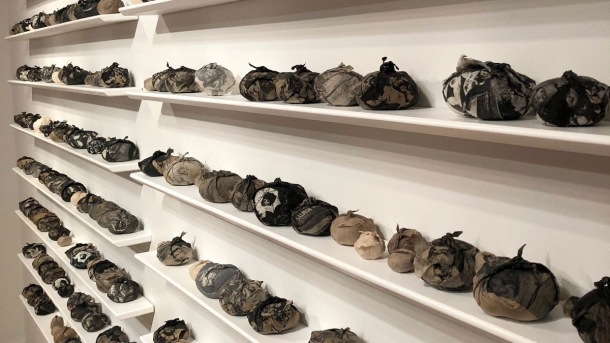 A while back we wrote about Emma Nishimura, a young upcoming artist whose work we described as “wonderfully detailed and meticulously executed.” (See our article A Young Artist here.) She told us then that she planned “an artistic future full of art-making, exhibiting and teaching.” We are delighted to report that this future has come to pass for Emma. Here is the update she sent us recently to let us know what she had been up to:

It was a busy and exciting 2018! I’m incredibly honoured to share the news that in November, I was awarded the Queen Sonja Print Award. This international printmaking award, created by the Queen of Norway, is awarded every two years. The jury this year included Lars Nittve, founding director of Tate Modern, Mark Nash, writer and curator, and Tauba Auerbach, recipient of the 2016 award. There was a substantial cash prize, as well as a residency at the Atelje Larsen workshop in Helsingborg, Sweden, where I will spend a week in August. A Lifetime Achievement Award was also presented to David Hockney at the event, and I got to sit beside him at the ceremony! Read here for more information about the award.

I had a wonderful time in London, where the award was presented. I had a lunch and dinner at the Norwegian Ambassador’s residence where I met H.M. Queen Sonja, the Norwegian ambassador, the QSPA Board, and other artists, curators, museum directors, and art patrons. The award ceremony was at the Royal Academy, and was quite an event. Hosted by Kare Conradi, a Norwegian actor, it featured Norwegian dancers and musicians, as well as speeches by H.M. Queen Sonja, Lars Nittve, and Dame Julia Peyton-Jones. A video of me working in my studio was shared and I was deeply honoured to accept the award. Following the ceremony, there was a reception in the Collection Gallery, where my work was featured–a temporary wall was built over a Michelangelo relief to show my prints! After the events at the Royal Academy, there was a celebratory dinner with H.M. Queen Sonja, the board, the jury, and some of my family. The entire trip was a surreal and incredibly special experience.

In addition to many other exhibitions and awards, Emma is also participating in a prestigious group exhibition at the Royal Ontario Museum titled Being Japanese Canadian: reflections on a broken world, February 2 – August 5, 2019.

“Explore a series of artworks interspersed throughout the Sigmund Samuel Gallery of Canada, and encounter personal perspectives on the exile, dispossession and internment of Japanese Canadians during the 1940’s. This installation features contemporary artists who experienced this history firsthand, and those who grapple with their parents and grandparents’ experiences. Being Japanese Canadian prompts us to reflect on the long-lasting ramifications of this historical Canadian injustice, and what it means to be Canadian today.”

Her work is in public and private collections and has been exhibited nationally and internationally. She is currently an Assistant Professor at the University of Guelph. Previously she taught at OCAD University, Sheridan College and the University of Nebraska-Lincoln.

Emma’s news was thrilling and gratifying, especially given the challenge facing so many artists in these days of diminishing financial support and recognition.  So, congratulations Emma! We look forward to hearing more news of your success.

To keep posted on Emma’s work, check out her website.

Here’s what Kate Taylor of the Globe and Mail says about Emma’s group exhibition at the ROM, Being Japanese Canadian: Reflections on a Broken World, on until August 5, 2019:

“Toronto printmaker Emma Nishimura, whose grandparents were interned, addresses that pain directly yet elliptically in an installation of little fabric bundles. In Japan, stores often give customers their purchases packaged in tasteful handkerchiefs, but here, the fabric is printed with fading memories, showing old photographs or merely blank grey.

Shame, forbearance and time greatly affected how much the internees told others about their wartime experiences – there was more public discussion of these events in 1988, when then-prime minister Brian Mulroney issued a formal apology for the internment, and compensation was paid to the community – and Nishimura’s work elegantly addresses the experiences themselves and their legacy.

In an oral history piece, she has taken the text of her interviews with former internees and reproduced it in miniscule lettering to create etchings depicting the same fabric bundles. Those may lead the viewer back to the beginning of the show, where Nishimura contributes a series of geographic maps of the isolated sites in the B.C. Interior where the camps were located: Slocan, Revelstoke, Upper Arrow Lake … You have to know to look but the black lines of these maps are also made up of miniscule words, taken from various texts about the internment. The curators have hung them alongside the Indigenous land acknowledgement that opens the gallery: Here is a different map of Canada with a history of racism hiding in plain sight.

In the end, of course, government paranoia about Japanese Canadian loyalties was merely that: No spying or treason ever occurred in a community that proved truer to the country’s best instincts than its oppressors ever did. In an international political climate that is reviving irrational prejudices against migrants, it’s important to remember the internment. Here, it is artfully woven into the Canadian fabric with small strands of both pain and hope.”

This article can be found in WHAT’S HERE in the section Portraits.
We are @livingtoronto2 on social media. Follow us on