If you live in our Toronto neighbourhood (Glenholme and Rosemount) you may have noticed, in early May, the sudden appearance of a rather rustic looking bench on the north-east corner. We’ve received a lot of positive reaction to the bench which led to writing the story behind it.

The story begins in late 2013 when we finally decided to do something about our 1970s kitchen. Our contractor and friend, Dylan, was preparing to start the renovation when the big ice storm hit. A maple tree at the end of our property was badly damaged and when the tree service people finally came around they decided to completely remove the tree. Dylan took the initiative and asked if we could keep a lot of the wood – we were considering installing a wood stove at the time. For a while the big main trunk sat in our backyard that winter and Dylan suggested cutting it up so that we would have two big slabs when done, which could be used for “a bench or something”. Not giving it much thought we OK’d that. Out came the giant chainsaw! The slabs ended up in our basement “to dry out” and were there until recently when we finally needed to remove them to make space.

The idea was to place them somewhere in the backyard, but when it came time to decide exactly where to put them it was clear that there was really no room, no logical spot. It was a problem for a time. It required “thinking outside the box” to realize the obvious spot was right at the corner of the front yard facing the road. This opening in our cedar hedge already existed for years, first a slow death by dog pee, then a final blow when we needed access for a big dumpster during renovations.
Click on any photo to enlarge 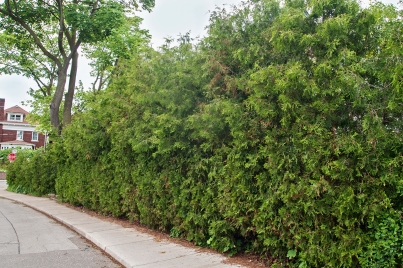 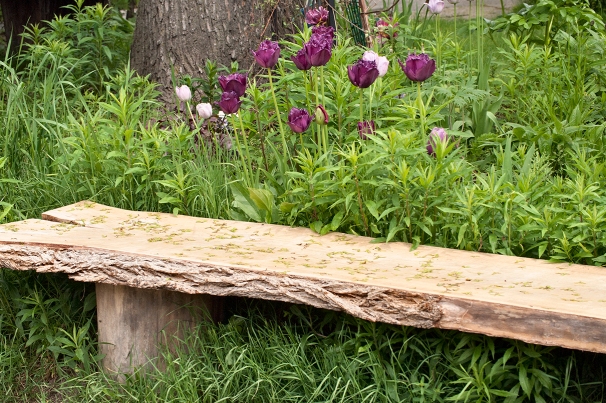 I called Dylan back, to move the slabs out of our basement and to properly bolt down the bench slab onto two stumps in the final resting place. We wondered if anyone would ever actually stop to sit. Why would they? Everyone is in a hurry, coming and going. The same day that the bench was ready, we looked out the window to see two women sitting there and chatting. That was surprisingly thrilling to see. Since then the bench has actually been well used, even by us!

This article can be found in WHAT’S HERE in the section Neighbourhoods.
We are @livingtoronto2 on social media. Follow us on

Love this and love the “rustic-ness”. We have a less rustic but comfy one on Hendrick, just north of Benson. Come have a sit! We’ve surrounded ours with lavender 🙂
Rebecca Smollett, Toronto
What a lovely neighbourhood welcome. When I visit Toronto I want to come and sit to enjoy the scenery and locals. Congratulations! Hope it encourages even more to follow suit.
Sylvia Wedge