To the River, the public art installation being created by Toronto sculptor Alexander Moyle, has reached the bronze stage of production. The beginning of this project can be seen in our first article about it, Creating Public Art. At that point the sculpture was being given its initial form in styrofoam. It has since been completed in styrofoam, and after that its surface was coated in layers of plaster with burlap added for reinforcement. In order to make the bronze, the plaster shape was then cut into pieces, the styrofoam removed from inside, sand casts made from the pieces of plaster, and bronze poured into those sand casts at a foundry. Now some of the component pieces have come back from the foundry in bronze, and are being reconstructed into the whole forms and figures. 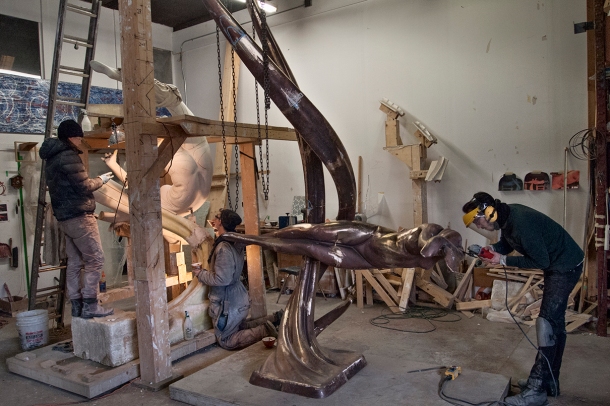 Moyle is very hands on – he uses an industrial foundry rather than an artists’ foundry. That gives him far more control, ensuring that the proportions are precise and the piece is true to his original conception, but it means that he does most of the work in his studio rather than relying on the judgment of the foundry personnel. This stage of the process is very labour-intensive, and Moyle has two assistants, Alexandra Chacinski  and Vuk Dragojevic, to help with the casts and the welding of the bronze pieces as the sculpture is reassembled. (Yes, two of the three people working in this studio are named Alex.)
Click on any photo to enlarge 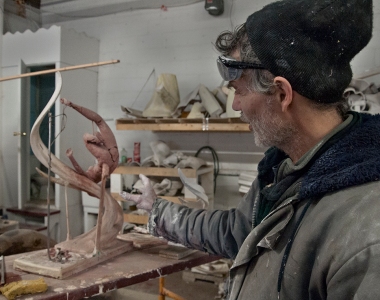 Last adjustments to the plaster form before casting 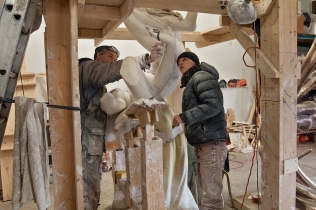 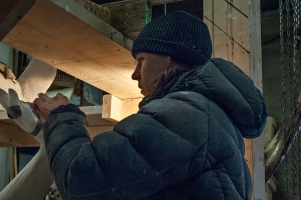 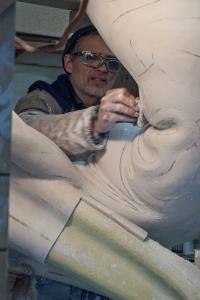 Reconstructing the form with the bronze pieces 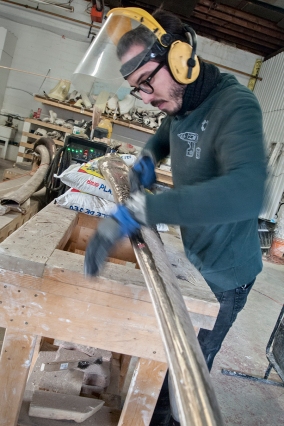 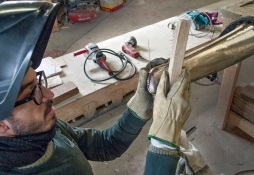 Grinding smooth and polishing the figure

The assembled figure Repose in bronze

The complete piece To the River is comprised of three figures. In addition to Repose, still to be bronzed are the figures Turbulence and Navigator. When all the bronze pieces are assembled, welded together and polished and patinaed, the work will exist as a finished bronze sculpture. The completed sculpture will be installed near the Humber River in Toronto. We’ll come back to it with our final instalment when it is in place on the site.

This article is an update to our issue Public Space/Public Art.