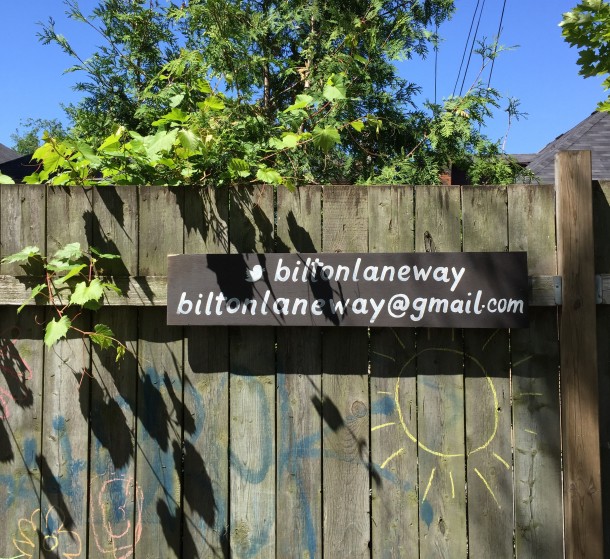 Public greenspace in Toronto – we assume with that phrase we are talking parks, ravines, river and lake shorelines. The tiny orphan spaces not large enough to be anything at all are usually beneath our notice. Here, along a laneway, is a narrow strip where weed trees have seeded themselves and grown up. Until recently it was totally wild and unlooked-after. Not even thought of as a place by most of us, though used by locals for a variety of purposes.

This laneway was always a shortcut – one of those routes residents use when quickly deking out for milk, where parents walk their kids to school or let them safely try riding their bikes away from traffic. Smokers relegated to the outdoors relax in the shade there. Dog walkers of course come through, little plastic bags in hand. Once in a while a forgetful home baker pulls a burnt effort, still-smoking, from the oven and sets it just outside a back door in the lane until it cools. And less savoury uses are in evidence – someone who feeds feral animals leaves bags of stale breads here and it has also been a dumpsite.

The strip of land along the laneway is adjacent to some lowrise residential buildings in a mixed-use neighbourhood. For the apartment dwellers the trees provide a lovely screen which filters light and obscures an ugly carpark. Nesting birds provide a melodic cacophony that counters the city noise. The mere sight of trees improves our health, which is the unsurprising finding of a recent study conducted in Toronto.

How this orphan space came to conscious attention and then sparked efforts to protect and preserve it began after the ice storm of December 2013, which damaged 20% or Toronto’s tree canopy.

It all started when…

The quiet of a July evening in 2014 was broken by the reverberating roar of chain saws. Residents nearby were at first annoyed by the noise and then alarmed to see trees being felled. 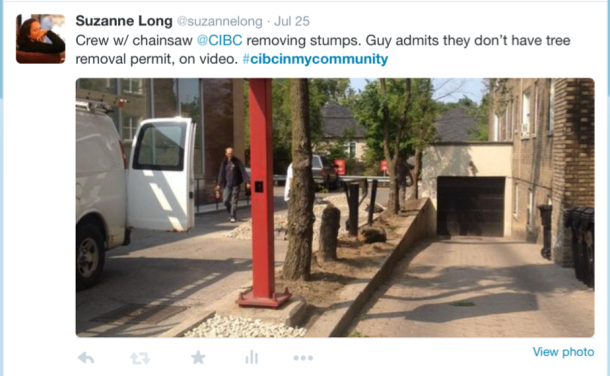 Here in the city, low and mid-rise apartment buildings are extremely livable rental accommodations. Built in the early and mid-20th century before today’s insane real estate market, they have generous sized rooms, entryways, closets – many features that residents of contemporary condos can’t imagine having. 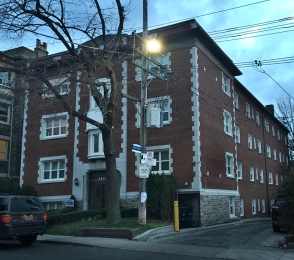 What they often lack is outdoor space – a balcony, a courtyard…. In mixed-use neighbourhoods they can butt up against businesses that have annoying lights, disturbing noise levels and excessive pavement with no green buffer. Tenants have few options to ameliorate this lack – they are at the mercy of landlords and property managers.

The trees being removed grew beside one such apartment building, between its driveway and the parking area of the bank next door. Some had been damaged by the ice storm. Rather than judicious pruning, the bank went for total annihilation.

Neighbours came out that evening and objected to the noise, the illegal cutting without a permit, and the destruction of an important component of their neighbourhood. The chainsaws were momentarily halted. Then came the realization – if these trees can be cut down, there’s nothing to stop the cutting of those behind the parking lot in the laneway too. If that happened there would be no trees around their apartments at all. Their city councillor was called, and the city arborist came out and measured the trees. The trees along the bank property line were not of a diameter that’s protected, but two of the trees in the laneway strip were, so it would be illegal to chop them down. The arborist went into the bank and warned them not to cut those two trees. The bank called off the chainsaws.

Over the next several months resident Suzanne Long began to strategize about how to permanently protect those laneway trees outside her window. This involved two fronts of action – reclaiming that greenspace by involving more local people in placemaking there, and establishing ownership of the land the trees are rooted in. Another resident, Susan Wilson, made a successful proposal to the Laneway Naming Project and Bilton Lane became an official named place. During that process, Suzanne spoke to a city surveyor who confirmed that the small strip of land belongs to the city and is part of Bilton Lane. It is public property.

Meanwhile, back in the laneway…

Concrete bumpers discarded from a previous iteration of the bank parking lot, mossy, old rolled up carpets, bricks and concrete fragments, layers of old asphalt – it takes some vision to look at this dumpy narrow strip and see a garden. But Suzanne Long was thinking of a community vegetable patch between the trees. 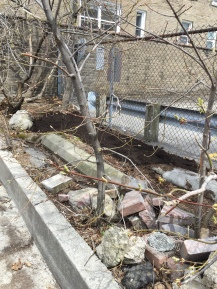 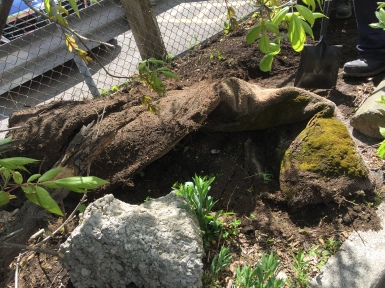 She planted seeds and organized a clean-up with her neighbours.

Clearing out thick weedy shrubs and dumped trash was a major heavy-duty effort undertaken by several residents. Suzanne called the local councillor, Joe Mihevc, whose office facilitated city services like special pick-ups of the rolled up carpets and all the cut and cleared branches. The bank, when asked,  removed the parking bollards they had dumped there years before. Underneath all the trash were layers of old asphalt that have to be lifted out with a crowbar. All that hard labour created a few small planting spots. A good start. 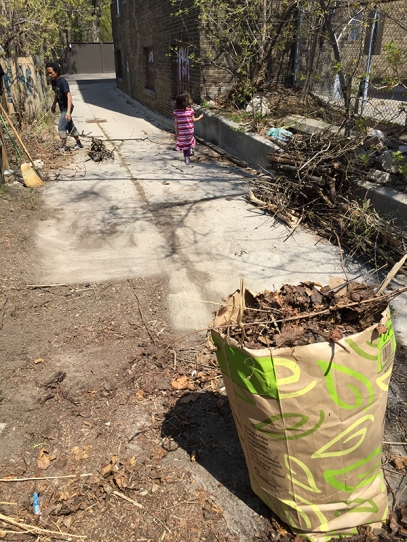 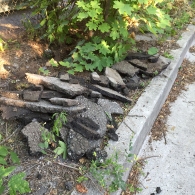 Compost was collected at the local environment day and dug into the few cleared spots. The gardeners put seedlings into the ground and into pots, which could be moved around to the sunniest spot. They hoped there would be enough sunlight between the trees for flowers and vegetables to thrive. 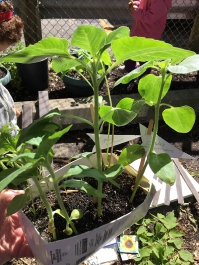 Suzanne’s next idea was to make signs that would establish that this is a community endeavour and invite everyone in the neighbourhood to participate. She is an initiator, and is interested to see what people will make of this informal space, but she says, “I don’t want to be the one who moves the agenda. I am happy to get it going, and I really want the trees to stay.” She asked her friends Christopher Rouleau and Kyle Gallant from Ligatures to come out and paint the signs, and she brought chalk so everyone could try their hand at sign making.

Over the summer, awareness as well as vegetables grew. The plants thrived and children and passersby were excited to see sunflowers and tomatoes growing and ripening. “That’s a benchmark,” says Suzanne, “about how much sun is there.” Most but not all attention was positive. Someone who leaves food for feral animals in that space felt encroached on, and wrote a bizarre note threatening to retaliate by holding the tomatoes hostage. A sign was stolen. Suzanne’s response: “Nothing can be so precious or twee that it can’t be lost. Things will go. I try to be zen about it. It’s a funny little microcosm of stuff that goes on down there. It really is truly weird, the people that walk by and actually care about it. Everybody, they really care about it.” 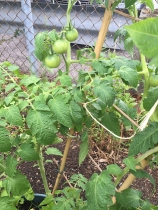 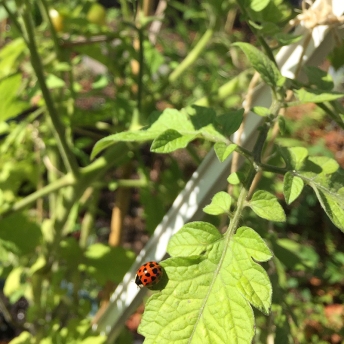 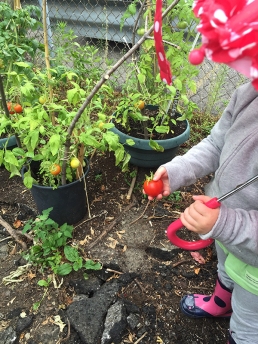 As the gardening season receded and leaves turned and then fell, Suzanne observed laneway life from her window. “One day this homemade structure just appeared at the far end of the garden strip. I have no idea what it was for – maybe some animal was stuck on the garage roof and this was the rescue. I think of it as the feral cat ladder. It’s been taken down now, but the materials are stored on the parking garage roof, I supposed until next time it’s needed.”

Looking down through the bare tree branches gets her thinking of spring. “My plan is to organize a clean-up day again. When I did it last year it was too late to be listed for the city’s clean-up day. And the venue wasn’t on a map then. But now I have registered, and Bilton Laneway is on the map. And more neighbours want to be involved, some from the houses on the other side of the lane. Nancy has offered her tools, so I might just take the tools that I have down to her garage. Maybe the city can deliver the clean-up supplies there. And Ruth has a barbecue on wheels that she’s offered for use in the laneway. On clean-up day or when we’re doing something out there, we can wheel it over. I’ll get posters up this year, and Mihevc’s Ward 21 environment day is May 8. I have three crowbars. I hope people will get crowbarring. My goal is to make holes to fill with compost from environment day and plant there. I need to start tomato seeds.”
And so the Bilton Laneway garden moves into its second year. 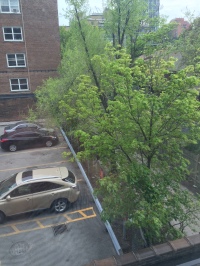 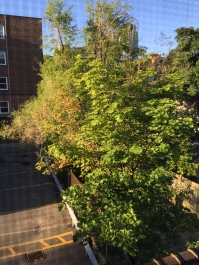 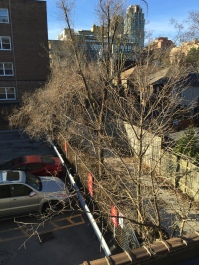 Bilton Laneway is registered as a Clean Toronto Together venue for Sunday 24 April, 9:30-12:30. Meet behind the CIBC branch at
462 Spadina Road.

Come by on clean-up day for a look, and if you’re feeling energetic grab a crowbar or a rake and give a hand. Walk through the laneway anytime you’re in the neighbourhood and check out what’s growing.

And have a look around your own neighbourhood. Here’s a map of Toronto’s laneways. Orphan space might be anywhere.

This article is part of our issue BREAKING DORMANCY.

We are @livingtoronto2 on social media. Follow us on

Wow!!! I’m sending this to everyone in my family. I read the article quickly. Where is it? I’m going home to read it on a larger screen. Age.
Linda Perez, Toronto

Great community action story – hope you get a good turnout for your cleanup day!
Carol Phillips, Barrie ON