In Toronto, taking the ferry over to Centre Island can be something of a cliché since it’s been a thing for city-folks for so many years. It’s often one of the first outings that recently arrived immigrants do when they get to the city – that and Niagara Falls. The Toronto islands are well-trod and long-discovered places but well worth visiting – especially as the weather warms and bicycles become available for rental once again after their winter hibernation. 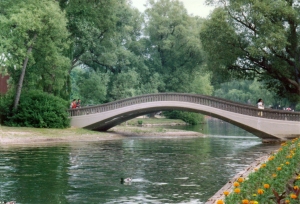 We recently did just that, taking the subway, then the short streetcar ride to the ferry terminal, the ferry and then strolling to the bicycle rental place on Centre Island. We chose a beautiful weekday in June – lucky us! There were no huge crowds, mostly families with very young children, young people with a day off and older folks with lots of days off. 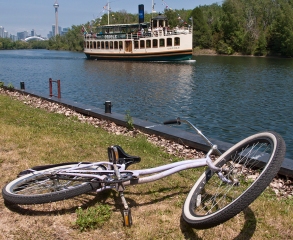 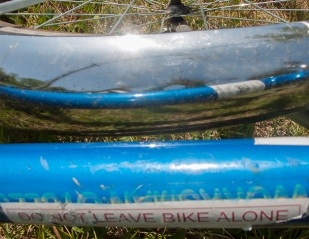 Once we got used to the bikes with no gears – having to recall the childhood skill of braking by pedaling backwards – we headed to Hanlan’s Point. We wanted to get to Gibraltar Point Lighthouse but first we stopped to look at and photograph the Island Water Treatment Plant. We have a certain obsession with the city’s infrastructure and utilities as you may remember from our Power issue. 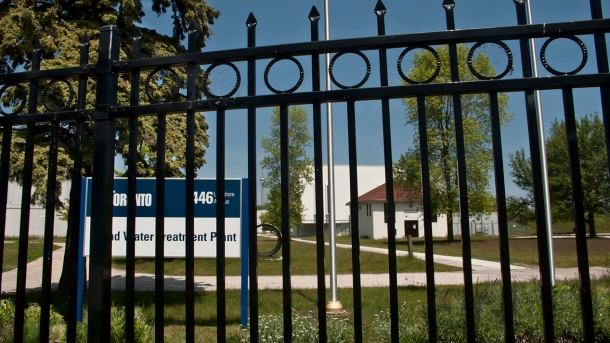 The Lighthouse was a treat since we had recommended visiting it at Doors Open but we didn’t get to it then. Of course it was closed but the outside was the charming part. We walked around, watched some German tourists photograph each other then pedaled to one of the lagoons around Hanlan’s point where you can see the most spectacular view of the city and where tour boats glide by. Then back past the ‘clothing optional’ beach – no takers today – and over to other side of the island to look for lunch. 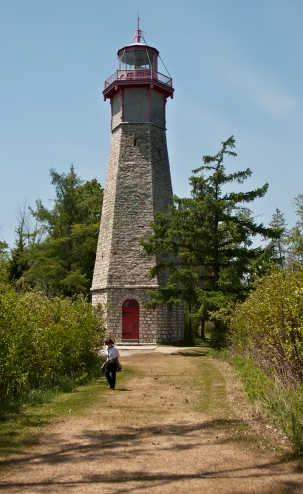 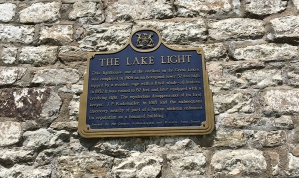 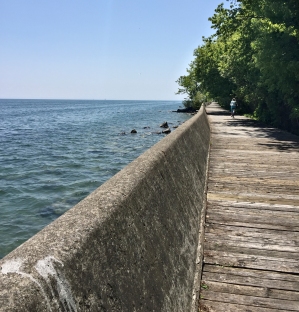 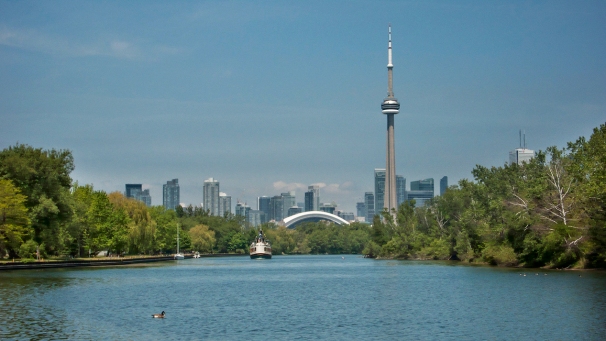 We had heard of The Rectory Café but had never tried it. If I say ‘hidden gem’, would you sneer? Of course it was hidden to us but when I mentioned it to a friend who sails around the island she said, ‘it’s a favourite of ours’. The setting is exceptional – a gorgeous old home with a huge patio under mature trees – all just feet from the water. Even though we were starving at this point and we would have eaten just about anything, we knew that such beautiful places can often fall short in the delicious meal department. But this is not one of those places – the food was truly delicious even by our picky tastes. We had scrumptious tandoori pulled chicken and smoked pork sandwiches, cider, all topped off with brownies, blondies for dessert and cappuccino. The service was attentive and gracious. Having made an error and missed our shared labneh appetizer order, they very generously took 20% off our bill. 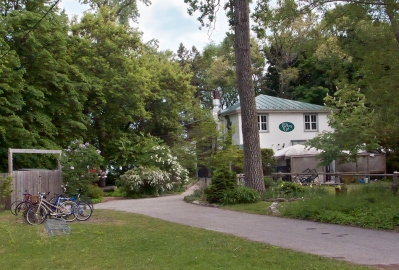 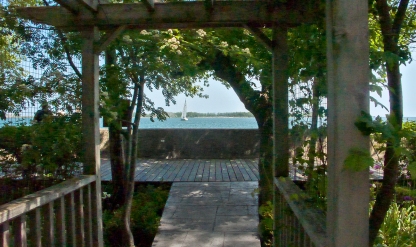 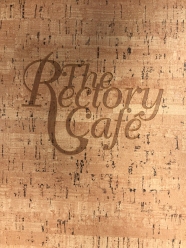 Now completely full – we didn’t need that appetizer anyway – we lumbered back to our bikes and cycled around Ward’s Island on the sidewalks that imitate streets, looking at the playhouse-sized homes. By this time, the weather had started to turn colder and we decided to pedal as fast as possible on those gearless bikes back to the ferry for the return home.

Our island outing was completely unscripted – other than picking a nice day. The rest just happened. We felt like we had been truly away from the city for more than the few hours that had turned into what I have been known to call a ‘Ferris Bueller’ day.

Plan your excursion with this map showing which ferry gets you closest to where you want to start your island adventure.

This article can be found both in WHAT’S HERE in The City section and in GOING OUT in the section Where We’re Going.

Sounds and looks like the perfect getaway! Have always wanted to try the Rectory cafe – we need to try harder.
Carol Phillips, Barrie ON