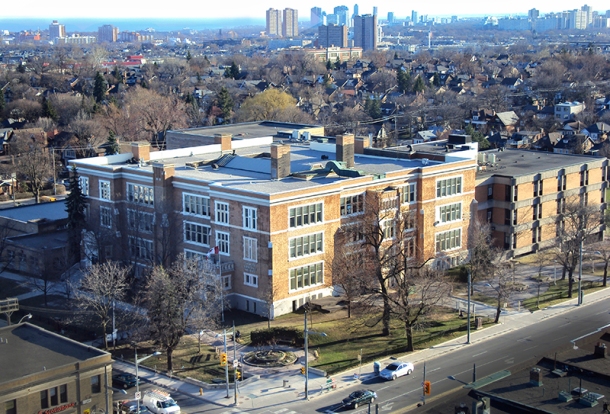 A secret rifle range where war heroes trained, a Group of Seven signed work, Sakura cherry trees in bloom on the grounds. All this and more were explored by participants in Jane’s Walk on a sunny Saturday, May 2. The history of this school and its continuing role in the neighbourhood that grew up around it was presented by Principal Richard Nosov and Oakwood students, Trustee Marit Stiles, and local Friends of Oakwood Elizabeth Cinello and Alejandra Bravo.
Click on any photo to enlarge 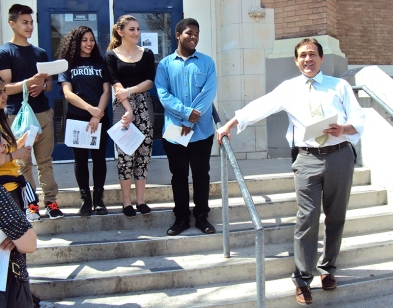 Barely more than a hundred years ago the corner of Oakwood Avenue and St. Clair Avenue West was at the outskirts of the city. That intersection was a corner of the farm owned by the Bull family, who had emigrated from Tipperary, Ireland, and had been farming that land since 1824. The neighbourhood consisted of market gardens, greenhouses, and chicken and pig farms. People who lived there could shoot rabbits while sitting on their front porch, and they did. St. Clair Ave was a sparsely populated but major thoroughfare then called Concession Road 3, and it was a dirt road. Further west along St. Clair was the Shacklands, an area outside the city limits where working people could buy affordable unserviced lots and build their homes themselves, and they did.

The city of Toronto was ambitious and growing, and wanted to expand up the Escarpment, so it annexed areas to the north and west of its city limits. How did Toronto turn old farms into a new city neighbourhood? The first thing they did was build a school. The Toronto School Board bought five acres of the Bull farm, and built Oakwood Collegiate in that farm field.

Oakwood Collegiate opened in 1911. To get to school the students could take the streetcar along Davenport or up Dovercourt, but that’s as far as the lines went, so they had to walk up the hill to school on wooden plank steps. This could be the origin of all those stories that older generations tell about walking miles to school in deep snow, uphill both ways.

In addition to the original 12 classrooms and a gym, Oakwood was built with a 700-seat auditorium. Clearly they were building for the community that was expected to form there. Anticipating the population boom, The Toronto School Board built elementary schools in the area which became feeder schools for Oakwood Collegiate: Regal Road Public School (1912 portables, 1914 today’s building), Hughes Public School (1912, sold to Urban Corp. and scheduled for demolition), McMurrich Public School (1912); and Earlscourt Public School (1907; original building demolished, occupied by a private school today). Elizabeth Cinello noted how these grand old schools were built on hills and left an impression on the students.

“We lived in the former Shacklands where houses were modest and small. I attended Hughes Public School in the 1960s. It was like a castle to me. I had to walk up Caledonia Hill, north of St. Clair, to get to it. The street was lined with old maple trees. The school had an open, elegant entryway, rounded staircases that led to the second and third floors which had balconies with beautifully carved banisters, so you could see right down to the first floor. I remember I used to look up at the soaring ceiling from outside my kindergarten class on the first floor. Classrooms had wood floors, high ceilings and large windows. Schoolyards and baseball diamonds were our playgrounds on weekends and during the summer months. For us, these impressive school buildings where no expense was spared, told us two things: first, education is important, it’s something to be valued, and secondly, we were important.” 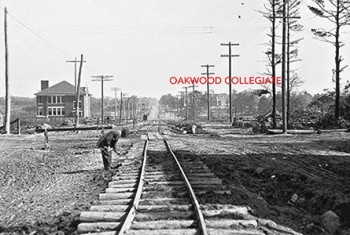 At exactly the same time that Oakwood Collegiate opened in 1911, the city began construction of a streetcar line on St. Clair. Until then transit had not been publicly owned and operated, but the private transit companies refused to build streetcar lines in new areas because the population was so sparse that it would not be immediately profitable. So, the city formed its own transit company and built the St. Clair streetcar line itself. The 512 streetcar started running in 1913. St. Clair Avenue was still unpaved.

Oakwood was originally just two stories high but the area grew quickly after the school and streetcar line were built, and soon the school added an additional story. By 1920, Oakwood was one of the largest schools in Ontario, and St. Clair West was a bustling built-up avenue. There were shops of every description and many restaurants and movie theatres. The city of Toronto had invested in itself and its expansive vision by constructing schools and streetcars, and in those few short years St. Clair West became an urban neighbourhood.

Oakwood Collegiate has a long and continuing history of excellence, as pointed out by Principal Richard Nosov. It established the first music program in a Toronto school, which continues today. It has fielded championship teams in every sport. It is one of two schools in Canada to be affiliated with UNESCO. There was at its establishment a strong military tradition, and a rifle range (in the 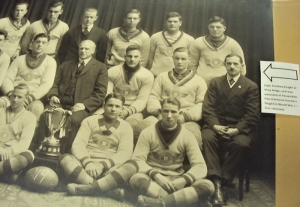 As the Jane’s Walk tour left the school building and continued on the grounds, with discussion turned to community use of the athletic field and restoration of the tennis courts. Trustee Marit Stiles:

“I was elected last Fall for the first time, and since then the provincial government has come in with some tough talk about the need for the TDSB to close schools they consider under-utilized. Oakwood CI is one of those schools the province defines as under-ultilized, and as such will come under review along with a group of other high schools in the area. That means consultation, study, discussion…. And so let’s talk about what role a school – this school – plays in our community. In particular, let’s talk about greenspace. Neighbours play pick-up soccer games and walk their dogs in the field, and teach their kids to ride a bike in the old tennis courts.
Click on any photo to enlarge

The TDSB is broke. They have a $3-billion capital repair backlog.  And right now all that wear and tear costs the school board money. It’s tempting to lock the fields…but in our area, where there’s so little green space, that shouldn’t be an option in my opinion. We need the city to get involved, but in a real way. That means helping cover costs of maintenance. Otherwise, the TDSB can look at partnerships with community partners or even private partners, such as tennis clubs. What would that look like? Would we as a community be willing to have more limited access to a really well maintained tennis court, if it’s restored by a private club? These are the kind of questions we have to grapple with. My role as trustee is to work to keep the community engaged and involved in these decisions but it’s a long road. I’m so pleased that Friends of Oakwood CI is coming together to help organize around this issue. We need to look at what’s going to make our school great for the students, staff, and remain a thriving hub in our community.”

Alejandra Bravo wrapped up the tour under the Sakura cherry trees, a gift to Toronto from Tokyo, laden with blossoms at the peak of their bloom. 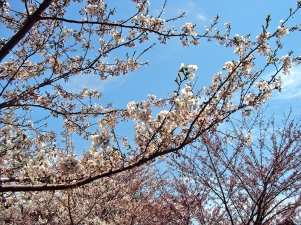 “Before there was a neighbourhood here, streets or public transit, there was a school. Since 1911 Oakwood Collegiate Institute has been at the heart of our community. That is how we used to do city building, build the infrastructure, and then build the housing. And since that time, Oakwood has been an anchor institution.

For more than a century, the school has provided a central community meeting and green space that has only grown in importance as other civic spaces have been lost.

The history of the community is housed at Oakwood – it holds our collective memories within its walls.

Today the question of its value gains in importance as a combination of changing demographics, provincial funding rules and the pressure of repair costs for aging buildings have increased sharpened the question of what is the role of the school board and city role in supporting schools as community assets. In our Jane’s Walk, we got together to imagine what more we want for and from our local schools.”

This article can be found in WHAT’S HERE in the section The City.

We are @livingtoronto2 on social media. Follow us on