Wherever I’m out walking, I always make sure my route cuts through Wychwood Barns. And every time I enter that soaring cavernous Mainspace, I glance up at the second floor opening at the top of the staircase half expecting to see a drummer or maybe a trumpeter up there. If I’m walking in the evening, the twilight blue through the skylight sets the Moonlight Sonata once again reverberating in my head. Even on Saturday mornings with the Farmers’ Market bustling around me, melodies and images are mentally overlaid and seem to hover in that space. For me, the Barns are a palimpsest of Music in the Barns concerts.

To hear music in Wychwood Barns is a vivid sensual experience that starts with the striking scale of the repurposed streetcar repair facility itself. Its dramatic lofty height is enclosed by solid stone and gleaming new glass end walls. These hard surfaces are softened by acoustic tiles installed above to produce an exquisite sound environment. Concerts incorporate visual art hung or projected on walls and suspended screens. The lighting, as it falls on old stone surfaces, is atmospheric and dramatic. At intervals and for receptions, a wine bar with high cocktail tables creates a convivial feeling of familiarity that incites conversations amongst audience members who until then were strangers.

Music in the Barns has been a continuous presence in the Barns since they opened in 2008, and offers musical education programs in their Studio 164 as well as concerts. Carol Gimbel, the violist who conceived and founded Music in the Barns, recalls, “When Wychwood Barns was being built I had recently moved to the St. Clair West neighbourhood and I was excited about how they were developing that project. I liked the connection with the environment, which was similar to my time with Symphony in the Barn [organic farmer Michael Schmidt’s memorable concerts at his farm outside Toronto]. I had been a part of a storefront collective in New York and was excited by the way you could interact with the community through having a storefront presence. I was also contracting and producing for different orchestras in Toronto and looking for space to teach. Somehow instinctually, I don’t think I knew consciously, but instinctually I thought that was the place that could bring all of those things together.”

Every aspect of Music in the Barns is innovative – the choice of repertoire, which features contemporary Canadian composers in conjunction with classical masterpieces, the concert venue, the configuration of space, the combination of visual art elements with music, the publicity and funding strategies.

The concert – the art

For artistic director Gimbel, the conception of each concert is organic and personal, extending into what would have impact on the future of classical music and on the audience. Gimbel describes her process: “Generally, the concept for what pieces I want to present comes first. [The pieces] usually come to me on a gut level, including who will be a part of [the concert] who I imagine to be the ensemble for it. Of course we have our core members [who are] with us in every concert but we have guests and that’s really where the spark comes from. The rest of the process is to bring that spark across to the moment that it hits the stage and for the audiences to experience the same energetic spark that I receive when I get the original inspiration.”

screens. Gimbel explains, “In the instance of the Light concert… I wanted to do a concert in early December and the date that looked the best happened to be the first night of Chanukah and… the anniversary of John Lennon’s passing. When I started researching John Lennon’s passing, there was a lot of the idea of light in Yoko Ono’s work and the memorial in Reykjavik. I was in New York at the time and there was this fascinating show about bioluminescence and ecosystems at the Natural History Museum, so my eye just started going towards this concept of light and sound in the world around us. That’s how it came together and then I happened to write my cousin and she said that she had these incredible images [from Sick Kids] and that was exciting how it just sparked.”

Unlike a conventional concert hall, there is no static layout, no permanent stage or seating. Musicians might sit on a small platform in the centre surrounded by rows of seating for the audience. Or the stage may be placed to the side or at one end of the space, with a screen glowing with images on the wall behind. Every concert reconceives the space, and often the ideal arrangement comes in rehearsal.

Gimbel describes performing in the round, “When we’re in the centre I really enjoy the feeling on the stage that we’re almost in the same configuration that we would rehearse in. There’s a sense of preserving that kind of focus and feeling that we have in a rehearsal room, versus too much awareness of an audience. I want the audience to have this glimpse of something that’s very real; our art as classical musicians is this process, which is sometimes hidden. Being in the centre gives the audience that chance from the visual perspective and also gives a sense of what it preserves between the players, all the different dynamics and communications. That’s the joy of presenting chamber music – there’s all that wonderful interaction.” 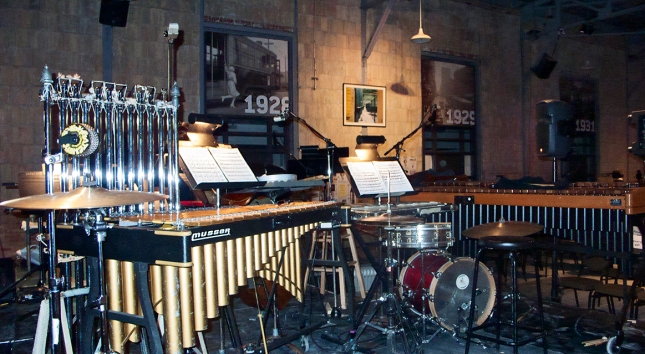 Other configurations emerge as the concert conception solidifies. For example, one concert presented a stage management problem because arrays of different instruments would be used for various pieces in the same concert. Rather than off-loading and resetting all the instruments, two separate stage areas were set up. The audience was invited to move between them, standing close to the gleaming percussion for an exciting and intimate listening experience. For Carol Gimbel, logistical challenges become artistic inspiration.

Most recently Music in the Barns presented a concert on November 29, 2014 with guests Cullan Bryant and Moshe Hammer. Gimbel describes how it came about, “The inspiration for this concert came around my collaboration with Cullan Bryant, the pianist, and then thinking about the idea of having a piano in the Barns, and then the idea of the actual performers… and I was excited that they were all available for that date.”

That concert was the first time that a piano had been featured in concert at the Barns. “It’s quite challenging to get a piano into that space, well not physically but logistically and financially because you can’t store it there overnight, so the truck has to pick it up late at night. And the Farmers’ Market was also in the morning, so it can’t be set up until after that closes. The logistics are quite a challenge.” Once the piano is in the Barns, the question is where to put it. “If we have it in the middle, because of the way the piano opens, people will be on a side where… they’re not getting the sound and they’re not getting the visual. This conversation came up with the musicians in the process of developing the musical side of [the event] and then it set my mind to thinking about the logistics of the piano and where it was going to be set up. To see it in the space was quite a beautiful moment.” 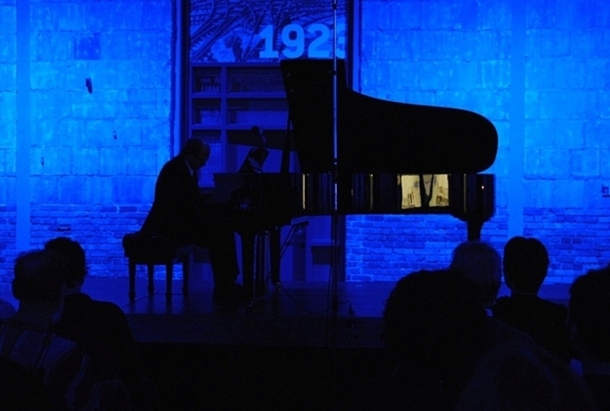 The concert began with a solo performance by Cullan Bryant of Beethoven’s Moonlight Sonata. The entire space was lit only by the cobalt blue lights set high along the walls, silhouetting the pianist. It was as if the concert was actually taking place in moonlight. Gimbel recalls, “I have to credit that to Cullan because he made me promise so many times before that concert that it would be in blue light. I had the stand light on the stage set up for him and he came up and turned it off. And I was standing in the back and thinking…there’s this long build-up… this four or five month build-up, at least, to a concert and I was thinking this is the concert now, this is what I was imagining, and the beauty of it being in the dark like that, in the blue light, was just so magical.”

Getting the word out

To present classical music in this unconventional manner requires an unconventional funding model. Music in the Barns concerts come together out of spontaneity, inspiration, the momentary confluence of artists’ schedules and fortuitous availability of stimulating players. This process requires flexibility, rather than laying out a fixed schedule far in advance, and that seems to make corporate sponsorship less likely. Locals who frequent the Barns Farmers’ Market and other arts venues there comprise a ready audience. Gimbel also has been innovative in publicizing – she offered her first two concerts on Groupon, which guaranteed a million local eyeballs on Music in the Barns and brought people from across the GTA. Concerts are now routinely sold out, but ticket sales alone do not cover costs. Gimbel has recently participated in Lean Arts, a five-week mentorship program – a partnership between the working group Opera.ca and Mars development which helps performing arts organizations find funding by sharing the tools and techniques applied by successful startup companies. She is in conversation with the arts councils, which are excited about the work and very supportive. Music in the Barns also does concerts in private homes and are always looking for more possible homes since these concerts support the concert series. Gimbel is open to any ideas of how to connect with funding channels, which will preserve the presentation model as well as the accessibility and gracious feeling of welcome for the audience that has been developed. “It’s a slow build but I’m hoping that, in the end, it will be an example of a new model of how classical organizations can be successful.”

Music in the Barns is moving forward on many fronts. They are working on bringing a show to New York, and performing as part of the Toronto Summer Music Festival. And Music in the Barns will record its first album in the fall. One of their biggest projects ever is Song of Extinction, a large-scale multi-media collaborative project with Toronto composer Rose Bolton, Toronto filmmaker Marc De Guerre and Order of Canada poet Don McKay. This exciting production will be premiered at Music in the Barns in 2016.

Gimbel reflects, “I’m really very fortunate – I feel like I’m following a yellow brick road to the concert, and people give me little bits of information and I just try to make sure to dot all of my i’s and cross all of my t’s. And working in this space, you know this is the seventh time, and each time it gets easier. I know more and more what are the potential issues that can come up.

“I have to say, it just amazes me how much the community went through and came together to save the Barns and make this happen. Now for us as artists to be able to bring forward our dreams in that space – it’s very, very meaningful.”

This article is part of our issue OUTPOSTS: Ventures Beyond the Box.