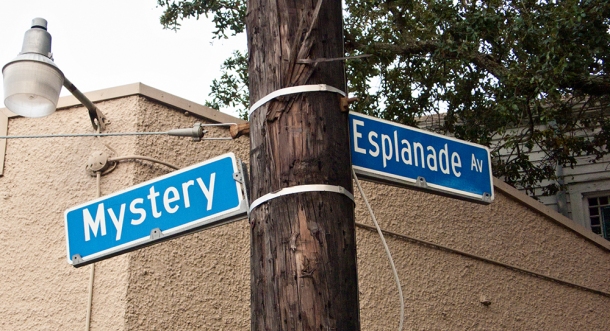 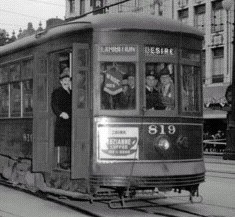 But these days Blanche DuBois wouldn’t be arriving on the streetcar named Desire. Most of New Orleans’ streetcar system is defunct; occasionally we come across old tracks embedded in residential side streets which give evidence of its former extent. Like most North American cities after WWII, streetcar transit was decimated in favour of private cars, supplemented for those who couldn’t afford one, by buses. The St. Charles route is still running and is the oldest continuously operating streetcar line in the world. All the streetcars on the few remaining lines are the original wooden ones. They function as efficient, though limited, public transit but they look like a quaint, outmoded system because there are no modern cars on the tracks. Using only the historical cars seems to relegate streetcars to the past.

New Orleans is very conscious of its rich past; it’s the future that seems more in question. Unlike Toronto, the city is fecund with visible history. We had a drink in the room where in 1821 the mayor offered refuge to Napoleon, and loyalists plotted his rescue from exile on St. Helena Island. I don’t know what was being plotted in Toronto that year (we didn’t exist as a city), but I can’t think of any similar buccaneering adventure or the site where it’s commemorated. (And I hate to think who our previous mayor might have offered refuge to.)
Click on any image to enlarge 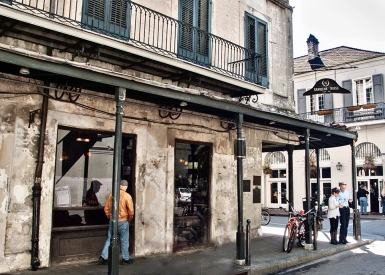 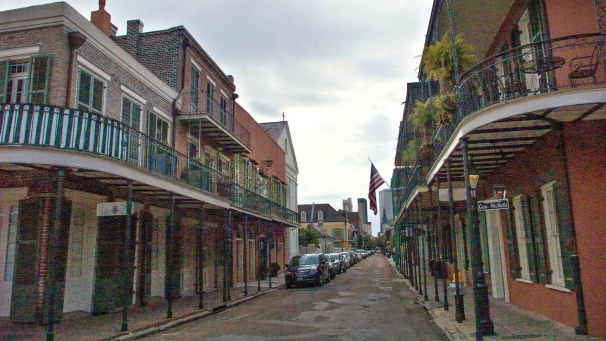 As we all know, in its vitality and construction frenzy Toronto has cavalierly demolished much of our urban history, which was far more straight-laced to begin with. We now sometimes suffer from antiquities envy and wish for the grand public squares and tall, pillared buildings of the great old cities, but we have missed the moment. Facadism has taken the place of heritage, and our few token bits of original buildings incorporated into new highrises fail to evoke our historic spaces and streetscapes. Not everything old is gone, of course, but what we do have of our built history is scattered and discrete, less visible to us and thus easily forgotten or never even known. Even the commendable establishment of a new public space like Dundas Square ends up shoehorned in and enclosed on all sides. Its potential vistas squeezed out by commercial downtown density, it is forced to make a virtue of emulating Times Square. 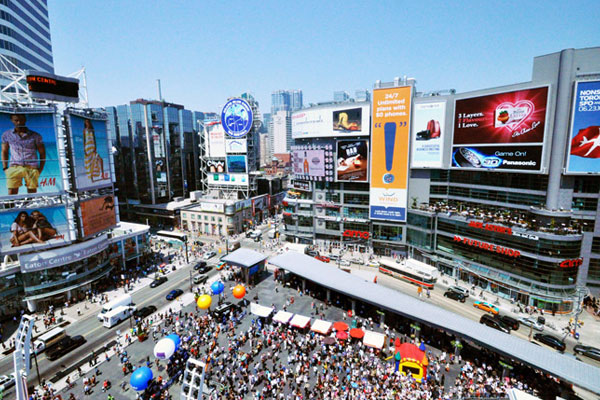 But our transit system is a different historical narrative

Our streetcars have been operating without interruption since street railways were first introduced in North America in the 1800s. Even after the turn of the century, while New Orleans and all those other North American cities were busy ‘modernizing’ by ripping up their streetcar tracks, Toronto kept intact a viable network as part of our transit system. Not that some people didn’t have the same idea here too – abolishing streetcars to get them out of the way of cars was also proposed in Toronto, both back then and more recently. Still streetcars have prevailed. They have been gliding down our streets every day for over a hundred and fifty years straight. Some lines were replaced by subways where density warranted, but a vibrant network remains. Toronto has been a streetcar pioneer, a transit exemplar in North America, and many places which chose to kill off their streetcar lines then are rebuilding them now. Resisting conventional ideas of municipal progress by providing continuous streetcar service is an impressive instance of civic foresight.

The TTC was formed by amalgamating several for-profit street railway companies after a city referendum in 1920 approved a publicly-owned transit system. Torontonians then, too, were demanding equitable and affordable service throughout the city, which private transit companies refused to provide. As Toronto grew and expanded, the city built public schools, public libraries and public transit – streetcar lines.

Today we don’t see any evidence of the longevity of this historically significant infrastructure on the tracks. The TTC no longer runs the older cars that would remind us how long streetcars have been in use. From the beginning, the TTC in its quest to modernize has preserved most streetcar routes but has sold off and replaced old streetcars.

In its first overhaul of the fleet, the cars inherited from the former owners were so run down that no one would buy them. Eventually they were given away. After a disastrous fire in Temiskaming in 1922 the city of Toronto offered them as disaster relief. They were loaded onto railway flatcars and sent to Northern Ontario to be used as emergency housing. 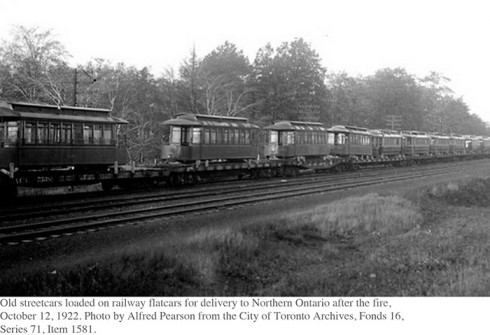 A subsequent generation of streetcars were sold in the 1960s. Toronto writer Gwendolyn MacEwen, in her short story The Holyland Buffet, recalls a transcendent encounter with one:

‘Well there I was, standing in the middle of Cairo one afternoon, hot, mad, and completely disoriented with people screaming all around me and donkeys braying and a chaos that exists nowhere else in the world – when what should I see?’
‘I don’t know. What did you see?’
‘What should I see, coming towards me with the slowness and grace of a dream, its colours an unmistakable dark red and yellow, the sign on its metal forehead a magic name recalling a distant, mythic land …’
‘What did you see?’ Ibrahim’s temper was quickly rising.
‘A King Street streetcar.’
‘A what?’
‘A King Street streetcar. From Toronto…, [t]here it was, coming towards me, this great fabulous beast.’

A freighter had sailed from Toronto harbour in July of 1968 loaded with streetcars bought by Egypt (as seen in  Steve Munro’s photos.)
Why wouldn’t we come upon our heritage here at home? 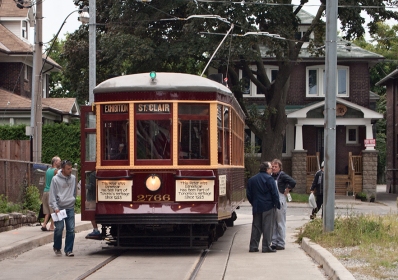 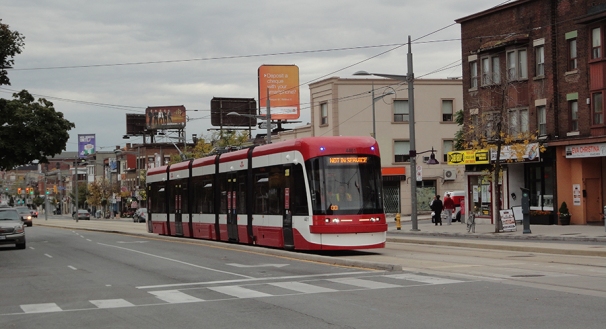 Our sleek new streetcars with their gigantic windows and low floor, no-step-up boarding are an exciting tech advancement. Adding some historical cars to the routes would put a little context on our streets. Toronto’s streetcar leadership and continuity could be celebrated by integrating earlier generations of streetcars back into our system. Occasionally sitting in the gleaming wood interior of an old car, with its glass-shaded ceiling lamps and window curtains, transports us temporally as well as geographically. Day to day, we are seldom offered an experience of our history and the older cars are an interesting counterpoint to the newest. Both are a great ride.

Presently the TTC owns only three old cars, hauled out once in a blue moon for special occasions – like putting out the fancy dishes for company.  Historical cars on the tracks would not be a gimmick for tourists, they would be for us Toronto residents who ride the rocket. The TTC has the capacity and skills to keep the old streetcars running. Old cars could be bought back, refurbished and sent out on regular routes. Not every route, not all the time. Cold winter temperatures seem to be a problem, so okay – six months a year. Whatever is reasonable but regular. Make them a part of the system.

This might sound expensive and/or inefficient, not a solution to our present transit inadequacies. Our city is strangling in traffic. The cutbacks of recent years have stripped service and undermined confidence in the public realm. Frustration at the delays in TTC expansion and the indecisive stand-off over modes of transit overrides any pride or affection for our means of travel. Subways or LRT, people are tired of the endless unresolved argument. We just want to get somewhere. But selling off our past has also come at high cost. It has stunted our understanding of how our city was built and its particular streetscapes formed. Our current transit debates are skewed and distorted. We live in the permanent present with no perspective or sense of how we got here and that undermines potential insights into how to move forward.

This article is part of our issue OUTPOSTS: Ventures Beyond the Box.

Oddly, one of the old ones was roaming around today. Love reading history of streetcars, disagree w argument.
Comrade Andy Papa, @pedalpapa

Loved this article – so rich! Really enjoyed the photographs and the story of an old King West streetcar in Cairo. Would love to see old streetcars back on the tracks and I can smile at names I just might give them.
Cheryl Kryzaniwsky, Port Elgin ON

What a rush going back to my youth. My mother gave me $1.00 TTC fare to and from school for the week. I was fortunate to have ridden on some of the older equipment shown in your pics.
Chris Krysaniwsky, Port Elgin ON

I adore streetcars! I look at them now with even more fondness since my grandson’s visit from England at the age of 2. We went for a meal at the (then) EDEN terrace on St.Clair West. We faced the street, and every time a streetcar went by ( every 2 minutes or so) Freddy shouted BIG RED TRAIN!!!!!!! Everyone on the terrace was enthralled. Too bad I didn’t think of passing a hat around!
Sylvia Bergeron, Carleton Village