Come celebrate the return to warmth and light in the heart of Kensington Market over the Winter Solstice. Support our local merchants and unique culture of Toronto’s beloved neighbourhood over the holidays.
Meeting Point: Corner of Oxford and Augusta at 6:30
Parade Departure: 7:00 pm
Lanterns will be sold from 5:00 p.m. to 6:30 p.m. at 260 Augusta Ave.
​$15.00 each.

– images from 2014 by Dahlia Katz Photography

For a first-person account of the Solstice Festival by an actual Befana click here.
For a bit of history about the festival see below…

“The Winter Solstice marks the longest night of the year and celebrates the return to the light,” explains parade director, Gabriella Caruso. “It’s a festive parade of music, art and fire-performance. It builds to a glorious fire finale, during which a central fire sculpture is set ablaze.”

The parade is the city’s only non-profit, commercial-free, hand-made festival. It’s the gift of Red Pepper Spectacle Arts and it’s the best community, family-friendly event I’ve ever been to. It’s the only event I know of where city officials allow fire on such a big scale.

Twenty-five years ago, I was at the first Kensington Market Winter Solstice event. It was cold. I could hear the snow crunch under my feet. The shops were closed. The streets were dark. There was hardly anyone around except for the actors and musicians performing in the best tradition of popular theatre. That’s when I first saw the enchanting horse puppet; it was in a mummers skit. It danced to the sound of bells, tambourines, and horn players. Actors cried out, doing their best to

banish the night and call the sun. Our mitten-clad hands offered muffled applause.

The event was created by Kensington resident Ida Carnevale who, together with a few friends, wanted to celebrate the winter solstice in the tradition of outdoor festivals. Years ago, she moved back to Italy and Red Pepper Spectacle Arts co-founders Gabriella Caruso and Andy Moro took it under their wing. They introduced the midwinter solstice traditions of Toronto’s multicultural communities and the beautiful and haunting winter images and stories of Canada’s Native cultures. Under their guidance the festival has grown into a community love-fest of over 10,000 revellers.

Giant puppets, stilt walkers, dancers, actors, musicians, and singers accompany revellers through the narrow streets of Kensington Market while warm glowing hand-made lanterns light the way. My favourite part of the parade is the happy revellers and the lanterns. I’ll be looking for those rascally racoon puppet characters, too, and I’ll be keeping an eye out for that wonderful horse puppet.
Click on any photo to enlarge. 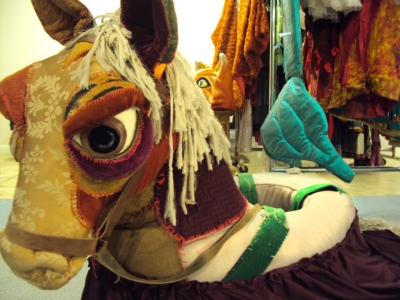 At Alexandra Park, the parade climaxes with the burning of a giant hand-made sculpture. It’s different every year. It takes weeks to make it and less than half-an-hour to burn. “This year’s centrepiece is a brilliant phoenix with an eighteen-foot wing-span,” says Gabriella. “The bird represents a re-birth, a rising out of the ashes and a new start for the new year.”

“We are so excited,” says Gabriella, “to welcome the Toronto community to the 25th anniversary of the parade. There are lanterns available so that anyone and everyone can join in, and we look forward to seeing you there!”

The parade is free but for a small fee you can buy your very own hand-made lantern or make one yourself at the workshop. It begins at 7 pm on December 21 on the corner of Oxford and Augusta and winds through the streets of the market, ending with the bonfire at Alexandra Park.

Click here to get more information on Red Pepper Spectacle Arts and to donate to the event. You will be rewarded with a unique gift.

The last performance the parade passes before the bonfire is the Befanas, Italian hags who screech their entreaties of love to the sun. Here is one Befana’s account, The Joy of Hags Singing.

This article can be found in WHAT’S HERE, in the section The City.
We are @livingtoronto2 on social media. Follow us on

We will be there–thanks for the heads up.
Patricia Good, Toronto

It was a wonderful event. Everyone loves a parade. Watch video of Kensington Winter Solstice 2014 at: https://vimeo.com/115314149
Torontowebcaster