When I got my first real job out of school I felt very lucky since I had studied languages and literature and did not really want to teach. The job was in the not-for-profit sector, which I did not know much about when I started, but where I ended up working for over 20 years. Most of my colleagues at this first job were as young, idealistic, and energetic as I was. Our bosses were not much older than we were and everyone was collaborative, polite and easy to get along with. Or maybe it was my naive way of looking at the world, always assuming the best in people. Initially I did not notice any power grabs or overt manipulation but I’m sure there was a lot going on behind the scenes. Everyone tried hard not to play the hierarchy game and employees who would have been called ‘managers’ in most for-profit businesses were called ‘coordinators’. This was before businesses started giving titles like ‘associate’ to entry-level employees. Eventually, I became a ‘coordinator’ and was responsible for a ‘team’.

All this was in the early 80s when everyone, including some in the not-for-profit sector, was reading In Search of Excellence, that business Bible that promised success if you followed its recipe of collaboration. The idea of working in teams and respecting everyone’s contribution no matter what their level of responsibility was considered innovative. We felt we were ahead of the curve since we had been collaborative all along. Still, we felt we could learn more from this approach. To illustrate the point, our newly appointed executive director first gave up his corner office for a more modest one, then moved his desk among the support staff (or what was then essentially a typing pool).

Many of us were at first impressed with this egalitarian stance, although the support staff seemed a little intimidated and less likely to share reports of their weekend activities with each other – what with the boss within earshot. Visually, the arrangement sent a great message but pragmatically it was difficult to have any meaningful conversations with him. Phone calls were no fun either for him, who had to be careful of what he said, or for the staff, who had to try to tune out his loud exchanges. In any case, the set-up did not last long. He had to resign due to health reasons and the next executive director who replaced him swiftly took back the corner office.

Of course there were all sorts of office politics, intrigues, grudges and some serious sexual harassment that I did not hear about until I had been long gone from the organization. Again, probably because I wasn’t paying attention but also because the woman who had been the victim was a very quiet, single mom who seemed grateful to have her secretarial job. I don’t know how consensual the situation was but it seemed that she was taken advantage of because of her relative lack of power and the real power of the harasser.

The organization had a good level of success though because at some point we began to attract very accomplished people with serious post-graduate degrees who could have had their pick of jobs in the private sector. In our humility that’s how we gauged our success. Although we were impressed by some of these individuals at first, eventually we recognized their foibles. There was one ‘director’ who having discovered the efficiency of word processing (yes, it really was that long ago) decided to have her assistant (really her secretary) key in every word of every paper document that existed in her predecessor’s filing cabinet. No team decision here. I remember the look on that poor woman’s face as she mindlessly typed outdated information for hours on end. She left soon after.

I moved on eventually to another not-for-profit with similar values and ambiguities about hierarchy. I worked hard on implementing the team concept and for the most part it worked well. People felt valued and autonomous and we were all proud that we didn’t have to order people around to get things done. There were lots of great ideas and I listened and tried to implement as many as I could. I felt rewarded and satisfied myself and was gratified to be working in an organization whose aim was to improve people’s lives. 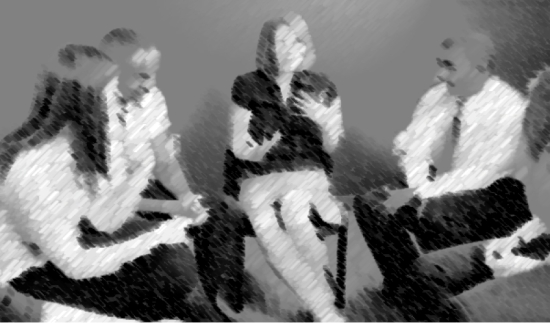 Of course there were some who took advantage of the freedom that came with this type of work and the way that we were organized and either goofed off or took liberties with their areas of responsibility. Fortunately, they were in the minority, but as in all similar management situations, they ended up taking more of my time than the more constructive things we were trying to accomplish. I worked individually with these employees and tried to encourage them rather than berate them. I also got the whole group together regularly and praised the more effective staff – hoping that this would invigorate the slackers. It worked for some but not for others. Ultimately, the latter moved on.

As this particular organization grew larger and more successful, there was more need for accountability and managerial oversight. We had to become more hierarchical and bureaucratic in spite of ourselves. We didn’t want to emulate the business world and its rigid approach to organizational management but we recognized the need for stricter guidelines and supervision.

There were obviously different ways of leading and no matter what guidelines we set up or what ‘rules and regulations’ we put in place, managing often came down to the boss’ personality and how she or he handled workplace relationships and the power that came with the job.

Over the years and in my various work situations, I experienced different types of bosses including:

The one who resembled the boss from Office Space who would say things like: “So if you could go ahead and try to remember to do that from now on, that’d be great!” We thought we liked this boss until we realized he wanted to be our friend while telling us to do something in a passive-aggressive and, ultimately, irritating manner.

The bully boss who would have temper tantrums or give us the silent treatment instead of having an honest discussion about what she expected from us. I ran into this person many years after leaving the organization and complimented her on how well things seemed going for them. Her response? “Well, as long as you think so, it must be so.”

The distracted boss who really cared about the cause but wasn’t interested in managing people; he usually left everyone to their own devices and trusted that they would eventually figure it out.

The star turn boss who worked hard, expected others to work hard but never shared any of the credit and expected praise from us.

And there was my favorite boss – the respectful, direct manager who was serious about the work but could also empathize with employees and have fun – sometimes at her own expense.

What kind of boss was I? Although I never ran an entire organization, I was at one time responsible for a sizable department with a few dozen people reporting to me. I enjoyed the challenge, the recognition and was proud of what we were able to achieve together. I tried to be a collaborative boss and many people said as much to me after I moved on. At the time, this was an effective way to get things done but I could foresee the challenges of trying to manage larger and larger groups. Looking back, I think I could have been less collegial, more challenging and more willing to confront problematic people. But in all, I tried to play well with others and I think they liked me, they really liked me!

In recent years, not-for-profits have adapted a more corporate-like approach to managing people and doing business. Many leaders of organizations are now ‘presidents’ rather than ‘executive directors’ and ‘coordinators’ are once again ‘managers’. This is likely due to the fierce competition for funding, both public and private, that requires groups to show they are serious about their ‘business’ and will not tolerate ambiguity. In spite of the financial fiascos of banks, and the many corporate failures, somehow business retains it aura of authority and the notion that they are more efficient and effective.

Not-for-profits are also attracting fugitives from the corporate world who have become disillusioned and want to do something more meaningful with their lives. This is bound to change the culture and the way power is used.

Interestingly, successful high-tech companies espouse the more collaborative, open-concept, ‘we’re all in this together’ workplace set-up that was such an innovation back in the day. I assume this is working well for these organizations since they are so prosperous – although the concept seemed to be ineffective in stemming the recently revealed tyranny of Steve Jobs towards many of his subordinates.

Of course the open-concept, power-sharing arrangements are not in evidence in any finance or insurance companies that I know of.

Workplace power is as complex as any other kind of power and the success of organizations, especially not-for-profits, depends on how well that power is used. No longer is not-for-profit work mostly for us arts majors who ‘fell’ into the sector. In addition to more business professionals transferring into the field, there are now numerous university degrees available in not-for-profit management. So, getting, having and using power wisely in these workplaces has become a more deliberate process. This power, however, still results in better outcomes if it is firmly rooted in the values of the organization. Every employee wants to be appreciated and this is especially important in not-for-profits since they usually pay less well. Most people who work in the sector believe in the cause of their organization and if they are recognized and respected will do amazing work with far-reaching social benefits.

This article is part of our  POWER issue.