Living Toronto talks to one of the city’s most respected and long-serving politicians, a former city councillor with a Ph.D. in theology and social ethics, and backyard chicken advocate – Joe Mihevc. 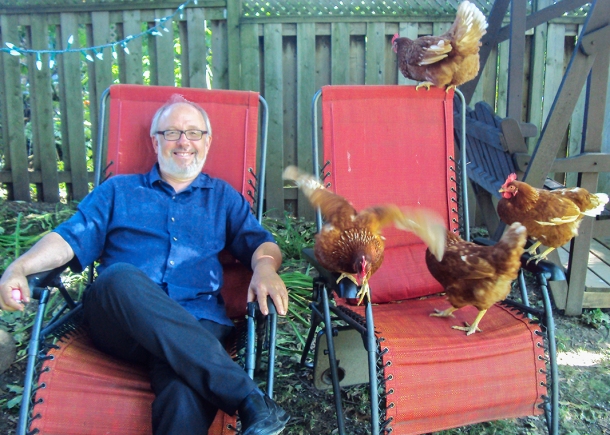 It had been a while since I had talked to Joe Mihevc when once again the former city councillor mentioned backyard chickens to me. He has four of them, the maximum allowed under the trial run taking place in four city wards. He introduced the backyard chicken bylaw himself during his last term in office. 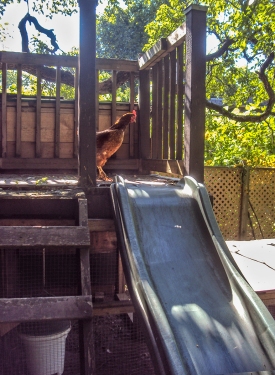 “Do we really need chickens clucking away in crowded neighbourhoods, in backyards swarming with urban wildlife?” I asked. Recently, I saw a hawk chasing a squirrel on my oak tree. Not long ago, I saw a squirrel and a rat fighting over birdseed while pigeons watched from a rooftop.

“Nothing can compare to the taste of a freshly laid egg from a happy healthy chicken,” Joe countered.

“I don’t trust people to get it right,” I told him.

Joe is persistent. He invited me to his house for breakfast to see and taste the glory for myself. What’s with the chickens, I wondered. I knew Joe had become the city council advocate for chickens during his last term. Maybe he needed a break, I thought, after working on so many challenging files – he was the city’s Poverty Reduction Advocate, he worked on supervised injection sites, he spearheaded the dedicated streetcar line on St. Clair, he was Vice Chair of the TTC and of the Budget Committee, and he was the Chair of the Board of Public Health during the 2003 SARS outbreak, to name a few.

At an event called Joe’s Commencement which doubled as a fundraiser for Progress Toronto and The Stop Community Food Centre, Joe’s friends, family, former colleagues, civil servants and constituents, came out to celebrate his 27 years of public service. Joe took the stage with the chicken dance. It was time to try and understand this chicken thing. 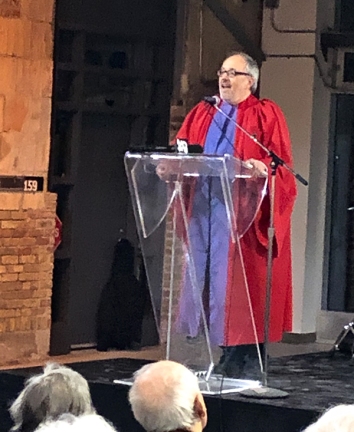 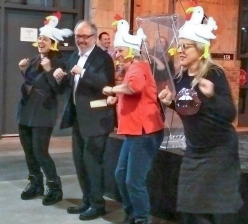 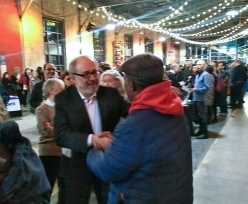 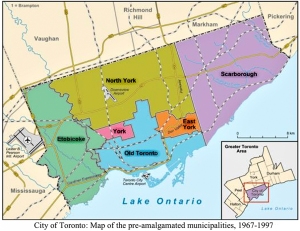 Truthfully, I was looking forward to a backyard chicken showdown with Joe; a poultry smack down between two old Yorkies. We both grew up west of Dufferin Street in the City of York during the 60s and 70s. Back then, the city was a hinterland hovering north of St. Clair. Its tax base was so small, its resources so limited that progressives relished the idea of a merger with our service-rich southern neighbour, the City of Toronto.

We were scrappy bilingual working class kids. Many of us were latchkey kids. In chicken terms, we were free-range kids. We were children of immigrants who knew something about farm life. We grew up with productive backyards neatly organized with vegetable gardens, fruit trees and chicken coops – necessities to supplement the grocery budget. I’ve seen my share of happy healthy chickens plucked and readied for the soup pot. It isn’t pretty, singed feathers and all. Today, you can still hear a lonely backyard rooster, illegal under the present-day bylaw, crowing as dawn and dusk come and go. I won’t say where it lives because Yorkies don’t tell on their neighbours.

I accepted Joe’s invitation to breakfast. I showed up for the kitchen table chicken talk with almond croissants from Mabel’son St. Clair.

Joe sautéed onions, slowly, in an iron pan, and then added potatoes and seasonings. While we talked, the fry-up sizzled quietly in the background releasing irresistible aromas that only potatoes and onions can conjure up. I was charmed, like the children who followed the Pied Piper. And I was hungry. Then he cracked the eggs. They glistened. The breakfast included steamed greens, tomatoes, fresh bread, freshly brewed coffee and service with a smile. The egg yolks, the measure of a good egg, were an intense yellow and had a velvety smooth texture. They tasted great. 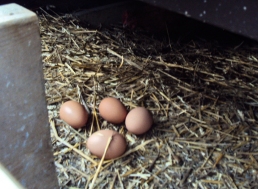 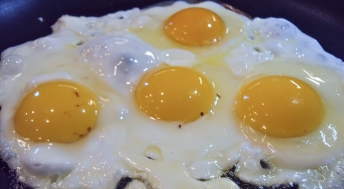 LT: Joe, how did you get involved with the chicken lobby?

JM: I got a call from a photographer involved with Foodshare and, I’m not kidding, she invites me to a home in Forest Hill for tea. I go to the backyard and there’s a bunch of chickens running around. They’re even going into the house. There are five women there and they’re encouraging me to be an advocate for chickens. I start laughing and I say, can you see the irony in this situation? You’re the matrons of Forest Hill telling this Eastern European ‘Shmenge’ guy (The Shmenge Brothers were a fictional polka duo played by John Candy and Eugene Levy on SCTV in the 1980s) that he should be the chicken guy. 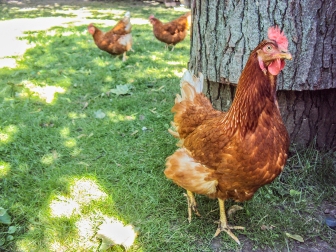 We both laugh. This is why the chicken crossed the road. It went from my Yorkie neighbours’ backyard chicken coops to tony Forest Hill on the other side of Vaughan Road and Bathurst Street – Yorkies’ closest thing to Rosedale.

LT: Why were they so into chickens?

JM: They said that they had all lived on a kibbutz.

LT: I guess they learned to love chickens there.

As I scoop up some egg yolk with a piece of bread, Joe seizes the moment and runs a bunch of chicken facts past me:

Mike Layton dropped by with a pot of tomato skins for the chickens. He had just made his own tomato sauce. He also had a homemade sausage for Joe.

JM: They eat more than you think and they will eat everything, including their own eggshells. I barely need a green bin. They get all my garbage. My green bin goes out once a month. Right now your green bin contents gets shipped all the way to Keele Valley where they mulch it and then it gets disposed of in grade B land where they plant Christmas trees. It’s not used on agricultural land…. Sometimes, if my family’s over or someone’s over, I’ll joke around and say watch, see this green bin, I’ll wave a magic wand, throw it in the back and in one week I’ll get you an egg out of this…. It’s a way of saying to kids this is how we take care of the earth.

LT: Where did you get your chickens?

JM: These chickens were bought, I would say, rescued from a factory farm in the Elmira area. They were in a small box, no sun, no exposure.

I see the chickens look good, good enough to eat. Indeed, if it weren’t for Joe’s bylaw the only chickens in Toronto would be dead ones from the store, headless or in pieces. I’m starting to waver.

JM: I’m the hero around here. All the kids know me, “Hi Joe, how’s the chickens?” I bring them to the backyard. I give the kids a couple of eggs and I say take them and tell me how they taste the next time you see me.  And they do. They want to be connected to life. 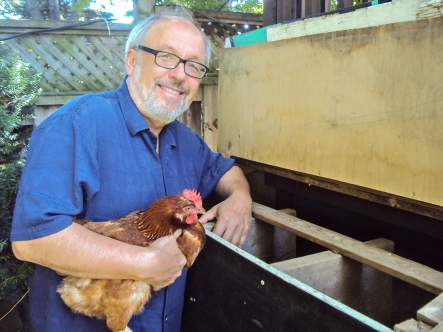 I link it to urban agriculture. We need to rethink the relationship between farm and table – garden more, can more… even on a balcony people should have a plant that connects them to their food source.

My neighbours over there are old-timers, Italian. They have the best vegetable garden and they’re into it. The grandmother loves the chickens. She gets her granddaughter and lifts her up and says look at the chickens. And if I’m there I take the granddaughter to see the chickens and give her an egg and she’s so excited. 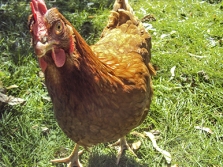 Of course, I have no illusions, I’m a Yorkie. Chickens are coming to our backyards. After all, it’s hard to argue with a chicken lobby made up of Forest Hill matrons, kids, and a former formidable city councillor. Maybe chickens will bring Toronto’s intense development back down to earth. And who doesn’t want fresh eggs from a happy chicken?

JM: I’m having great fun with it. Everyone makes fun of me and I make fun of the chickens, I want my tombstone to read ‘Here lies the chicken guy’.

In the meantime, Joe will be a visiting professor at York University in Urban Studies and Human Geography. He will be teaching The Planning of Urban Public Facilities. By early July, the course was already full. Living Toronto is looking forward to more conversations with Joe about the city and its human inhabitants.

We first wrote about backyard chickens in Toronto in 2014: click here.

This article can be found in WHAT’S HERE in the section The City and also in THE BIG ISSUES in the section Feeding Toronto.
We are @livingtoronto2 on social media. Follow us on

Takes a lot of pluck to make it happen, no doubt…
Patricia Storms, Toronto

It’s possible that all of Toronto will now allow backyard hens! This is egg-citing news and will give our friends in Toronto the ability to be closer to their food source. @livingtoronto2 Thanks for writing about this! Thanks Joe for what you do. If there is anything we can do to help just give us a call. You can find our contact info at http://www.RentTheChicken.ca.
Homestead Phil, Toronto